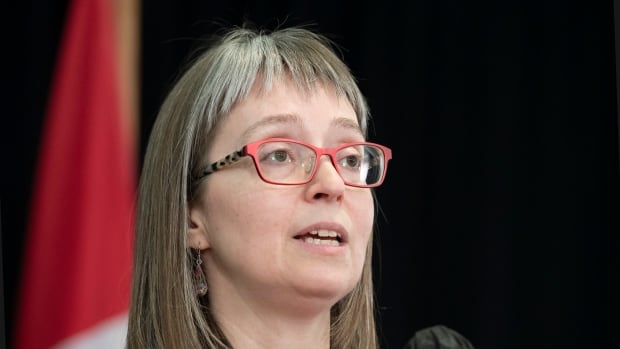 Alberta’s steady decline in the numbers of new and active cases of COVID-19 cases continued on Tuesday according to numbers released by Dr. Deena Hinshaw, Alberta’s chief medical officer of health.

The province reported 139 new cases on Tuesday. Active cases fell to 4,431, the lowest mark since March 9, Hinshaw said. Total active cases have dropped by over 20,000 over the past month, she said.

There were 336 people being treated for COVID-19 hospital including 85 in intensive care.

The province reported three new COVID-19 deaths, a man in his 40s from the Calgary health zone and two men in their 60s from the North and Central zones.

And while the province’s leading COVID-19 indicators continue to drop, the pace of first dose vaccinations has slowed.

Alberta’s reopening plan is tied to vaccination and hospital rates.

Stage 2, which will launch Thursday, required 60 per cent of eligible Albertans to be vaccinated and fewer than 500 COVID-19 patients in hospital.

As of Tuesday, 67 per cent of eligible Albertans have received their first dose and 15.1 per cent are fully vaccinated with two doses.

Hinshaw said last week about five per cent of the variants identified in Alberta were the highly contagious delta variant, first identified in India and now driving a wave of new cases in the U.K.

A single dose of a Pfizer or Moderna vaccine is only about 33 per cent effective against the variant, according to a recent finding from Public Health England.

While Hinshaw says the variant “is a very small proportion” of Alberta’s total cases, she said province is watching it closely as it considers the timing of second doses.

“So I would really encourage anyone who hasn’t yet had a first dose to book their appointment soon, as we consider the timing of that option for possibly accelerating second dose appointments,” she said.