EDMONTON — A Banff photographer’s photos are gaining popularity online after he posted photos of ‘wild skating’ in the Rockies.

Paul Zizka has been living in Banff for the past 12 years – he’s originally from Quebec – and used to spend his summers working in the national park.

“Like many I just made the trip when I was a teenager and the place just stayed with me,” said Zizka. “By the time I was done school it was just obvious to me that I wanted to be in the mountains full time.”

After moving to Banff Zizka started doing photography full time, and says it took him a while to find the style he was most passionate about.

“I love shooting ice, whether it’s lakes or glaciers, I love shooting people enjoying the landscape,” Zizka explained. “And I love astrophotography, night photography, so after a while it made sense to try to combine those passions into one kind of sub-genre.”

“It’s magical during the day of course but at night, for me, it takes it up a notch.”

Getting the perfect shot isn’t always a walk in the (national) park, Zizka says sometimes the window of peak conditions for wild skating is almost non-existent. He says you have to be ready to drop everything in the later months of the year, but that aspect holds a lot of charm for the photographer.

“Part of what makes it special is the chase. The fact that it doesn’t happen that often,” he said. “When you recognize those special conditions you just appreciate them so much more.”

Safety is also a major concern, if the ice is too thin Zizka says safety gear becomes top of mind and the experience is not as freeing.

“I love when you hit it just right, and you don’t have any concerns for your safety, and the clarity of the ice has yet to be affected by the weather. You can see fish under your feet, the lake bottom, the famous turquoise of our lakes.” 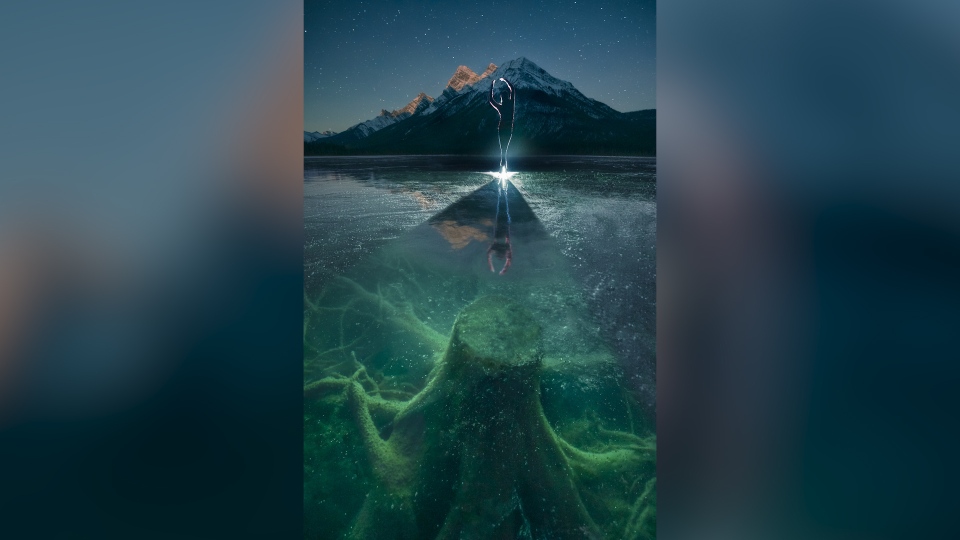 “That’s when the lakes pretty much turn into a giant mirror where all of the skyline is reflected around you, if you go out at night you can see the stars around your skates. It’s absolutely magical.”

If you’re in the Banff area during the summer months look up, you’ll likely find Zizka perched high above the mountain town taking photos.

“I love to be on higher ground, so quite a bit of hiking, scrambling, mountaineering, I spend a lot of time on glaciers.” 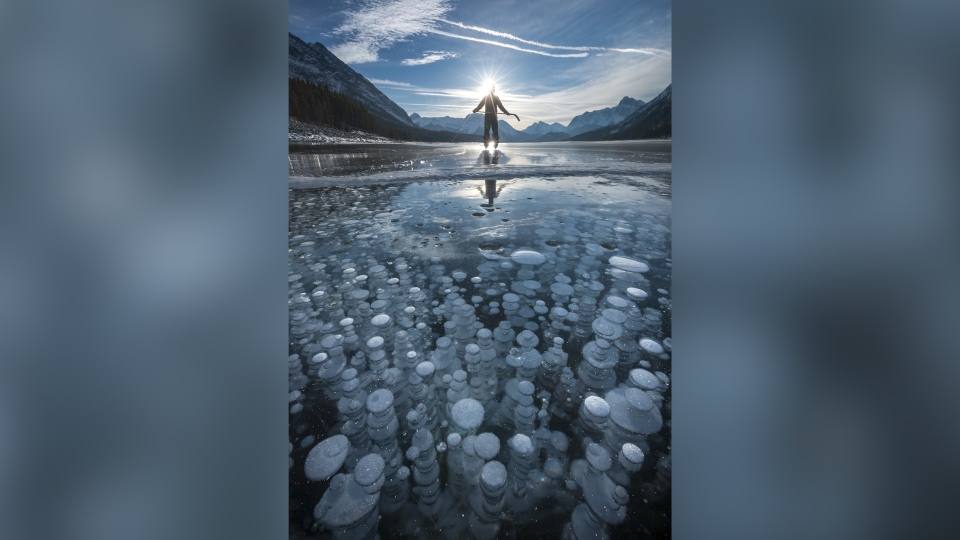 “I grew up skating on lakes back home in Quebec, and I started to seek out the same experience out here in Alberta,” said Zizka. “You can have that same magical experience but add the layer of the incredible scenery that we have.”

Zizka says he believes Alberta has the best wild ice skating in the world, and aside from the vibrant water and beautiful scenery, a big factor is Chinooks.

“Lakes like Minnewanka [and] Abraham, even though they’ve been snow covered, not all hope is lost, because you can get a warm wind blow through, and then almost overnight, that ice will be revealed again,” said Zizka. “You’ll sometimes get a second chance, third chance, fourth chance.” 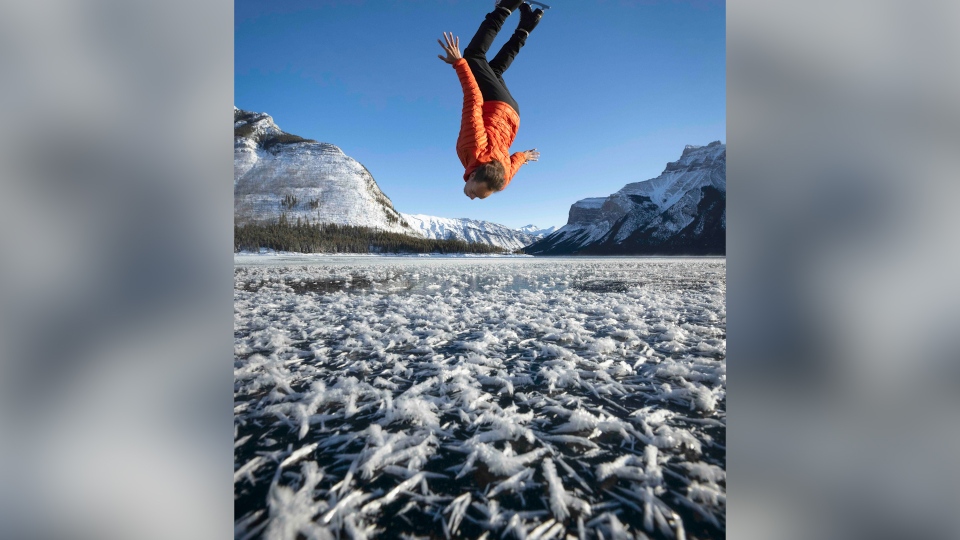 “It’s definitely something that’s been enjoyed by many for a long time, I think social media sort of put a spotlight on wild skating as of late, the last couple years we’ve really seen the community explode,” said Zizka. “We didn’t use to see that many people out there 10 years ago.”

He says the pandemic has made the lakes the busiest he’s seen them in years. But he’s excited to share the magic with others, and says reconnecting with Alberta’s wild spaces is a silver lining for many people.

“In these difficult times, it was incredible this winter to go to a place like Lake Minnewanka or Vermilion Lakes and just see smiles plastered on faces.”

He says one of the highlights for him was seeing people choose to discover the wild ice around the province over staying at home and watching endless hours of Netflix. Zizka says he saw people of all ages and all levels of experience on the ice, and the glee of wild skating brought many skaters right back to their youth.

“Being able to share it with so many people and see all those grown-ups turn into five-year-olds again, it was really special.”

He says though the pandemic has caused an explosion of people on wild ice this winter, it was only a matter of time as the number of skaters has increased slowly year after year.

“I think Parks Canada was also taken by surprise, seeing how many people flocked to mountains to enjoy the ice, and so I think next season if it does keep going hopefully as a community we can find ways to keep things safe and sustainable for everyone.” 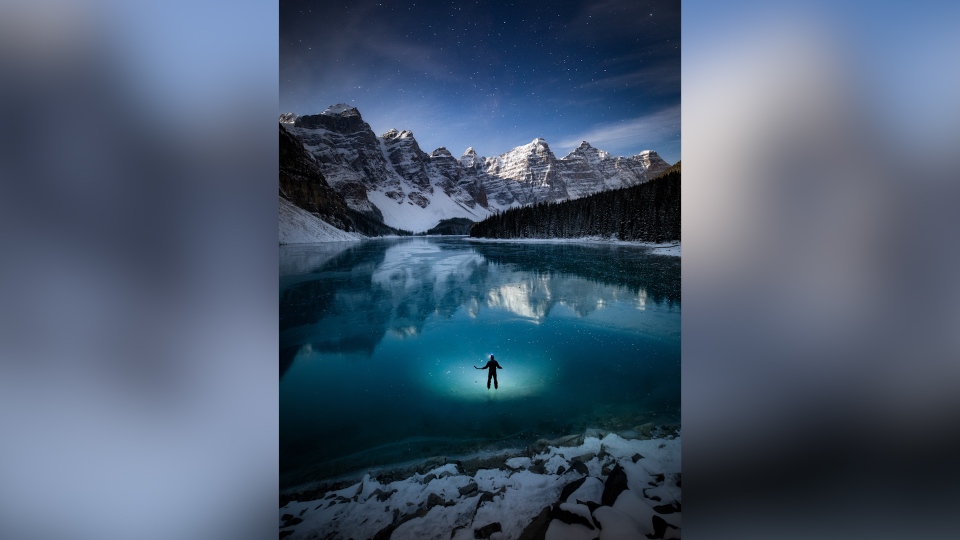 When asked to choose a favourite, Zizka chose a self-portrait he took at Moraine Lake last season.

“It’s really hard to line up the right conditions at a place like Moraine Lake where access can be tricky once the road closes, and then the snow tends to come shortly after the lake freezes and then the lake essentially is out for the season.”

Zizka hopes that his photos will get more people excited to try wild skating next season, and to encourage people to explore all Alberta has to offer.