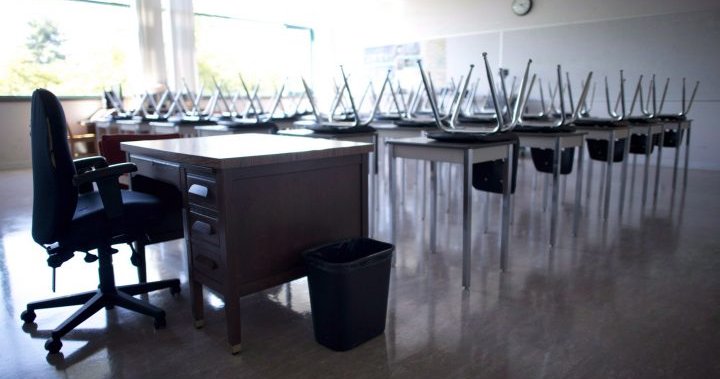 The Calgary Board of Education says eliminating at least one specialized program from its high schools will help balance enrollment and help to solve the issue of having some schools overcrowded with students, while others are under capacity.

The board put forward two scenarios Tuesday aimed at balancing enrollments, both of which involve eliminating the Arts-Centred Learning program, with one proposing even further program cuts.

Read more: Calgary Board of Education forecasts $46.8M in additional costs due to COVID-19

Scenario A would see the Arts-Centered Learning program discontinued, the board said, and programs would be “consolidated to fewer high schools,” balancing the number of students enrolled at the majority of CBE high schools.

In Scenario B, French Immersion, Spanish Bilingual as well as the Arts-Centered Learning program would end at the high school level, and the number of schools offering specific programs would be reduced even further.

“This scenario will also balance enrollment at most high schools, and results in even more students in the regular program being able to attend school closer to home than Scenario A,” the board said.

Acting superintendent of school improvement Darlene Unruh said decisions around discontinuing specialized programs like French IB are made by looking at the critical mass of students registered in a particular program.

“Alternative programs do also assist in attributing to the capacity of our schools, we do require a critical enough mass in each location to provide the rigorous programming for those alternative programs,” she said.

Unruh said the board expects that with whatever change is chosen, some parents may move their children to other schools so they can participate in certain programs, and said balancing enrollment also meant looking at transportation corridors and facilities for both regular and specialized programs.

The CBE said the options were derived from feedback gathered from more than 2,000 people, including students, staff, parents and community members, as well as the board’s values and planning principals.

People can give their opinions on the scenarios through virtual feedback sessions — which will be open from March 1 to March 17 — and the CBE plans to release its proposed plan between June and September of this year.

People will have one last opportunity to provide feedback on that proposed plan, and a final decision is expected by the end of 2021.

The new operating plan would be implemented in schools starting in September 2022.

The student advocacy group Support our Students said the scenarios show the CBE is “stretched to be able to utilize all of the existing infrastructure and to service as many students as possible in an effort to minimize commutes and maximize dollars.”

The organization also said transportation costs have continued to rise, but the board hasn’t gotten funding to balance that, meaning parents have had to accept increasing fees, impacting enrollment at certain schools.

SOS said it’s “ironic” that the provincial government focused on offering choices to students in its recently passed Education Act, “but here we have the CBE not being able to actually continue to offer and proliferate choice because it’s not being funded by the government.”

Global News has reached out to the Ministry of Education for comment. This story will be updated when a response is received.