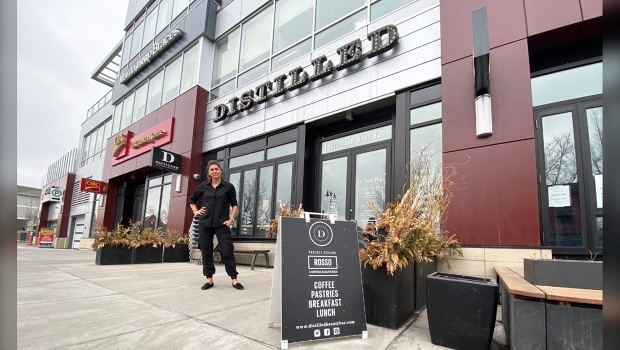 CALGARY — In the span of one month, she’s had to lay off 22 staff members, temporarily close her doors and lose out on an estimated $150,000 in sales.

Lisa Maric has owned the Distilled Beauty Bar and Social House for the past four years. She’s never missed a rent payment in her life, until now.

“My team is counting on me,” Maric said.

“My biggest struggle has been facing the issues of what’s going to happen to them — that’s 22 people and their families so there’s been a lot of fear and anxiety.”

Maric says Distilled has had to shut down its nail salon, but still delivers coffee and baked goods through apps like DoorDash.

The company counts itself lucky if it makes $100 a day, although there’s no certainty that operations can continue for much longer.

City of Calgary councillors recognize the struggle and voted Monday in favour of a three month deferral on property tax payments for residential and non-residential owners.

Maric agrees with the decision, but says her staggering loss in sales won’t allow her to pay taxes once they come due.

The beauty bar owner has struggled to reach a fair agreement with her landlord. As a result, she’s calling on politicians to bring in restrictions on what landlords can and can’t do.

“The deferment is a great step, but I still have to pay the city and if my landlord doesn’t pass that savings on to me or I can’t even have a reasonable conversation about the benefits that we both have access to, then how do we find an agreement?”

Distilled isn’t the only business struggling.

He’s had to temporarily close all locations and collectively lay off 100 workers.

“We’re really hoping for that 75 per cent wage subsidy grant, but with 100 people on our payroll it’s very challenging to figure out for the next six to eight weeks.”

Bokitch adds his landlords have been understanding for the most part of his situation.

“The hope is that the landlords are going to pass down any of their deferrals on to us because we’re all in the same boat,” he said.

“We’re not prepared to make any type of payments, we’ll make up for it in the future but the future is unknown right now.”

Help is on the way?

City of Calgary Manager David Duckworth says more relief for businesses and individuals will be explored and considered in the next two weeks.

Duckworth says running a further deficit simply isn’t an option though, given the deferral of property tax payments will cost the city an estimated shortfall of around $877 million dollars.

Mayor Nenshi is now calling on the federal government to introduce an aid package specifically aimed at municipalities, but other councillors disagree.

Ward 11 Councillor Jeromy Farkas is questioning why the city hasn’t rolled out its own comprehensive aid package.

“If anything we should be providing relief,” he said.

“This deferral is reasonable,” Farkas said, “but I want us to take a look at using one-time money to actually reduce the taxes that people have to pay right now.”