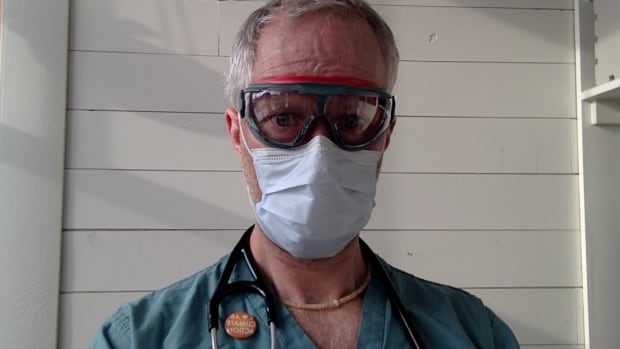 As Alberta slowly begins to emerge from the pandemic lockdown, the province’s top health official has stopped short of mandating masks in public, despite calls to do so.

One of those urging the province to legally require mask use is Calgary emergency doctor Joe Vipond.

“We need to figure out where a mask needs to be worn and then put a law in place,” he said, arguing strong recommendations aren’t enough to get a critical mass of people wearing face coverings.

Vipond says the precautionary principle should apply when weighing whether a health order should be drafted.

“The benefits are saving lives and possibly reopening the economy in a more robust way because we’re adding that extra layer of protection,” he said.

“And the harms are really negligible. There’s really no evidence of medical harms from this.”

Watch: Dr. Deena Hinshaw on whether or not to wear a mask.

Alberta’s chief medical officer recaps how and when to wear a mask after conflicting messages from officials. 1:26

Vipond says the direction from provincial health officials on mask use has been “pretty weak” and argues that as some layers of protection against the virus are removed — going out to stores, for example — masks should be mandated to fill that protective void.

On Thursday, one day after the interview with Vipond, Alberta’s top health official said she would not be requiring masks in public at this time.

“I’ve seen more and more people wearing masks as I’ve been driving to and from work and I think that a strong recommendation is having an impact,” said Dr. Deena Hinshaw.

“I think that we’ll continue to watch the impact that the recommendation has, and I also note that while the evidence indicates that mask wearing can provide some additional benefit, there are also some risks if people do not wear masks properly. So I think we need to think very carefully before requiring them by law.”

Vipond says modelling shows 60 to 80 per cent of people would need to wear masks before the rate of transmission falls.

“So, strong recommendations, in my mind, likely won’t be enough to get us to that level,” he said, pointing to a time when seat belts became legally required and use skyrocketed.