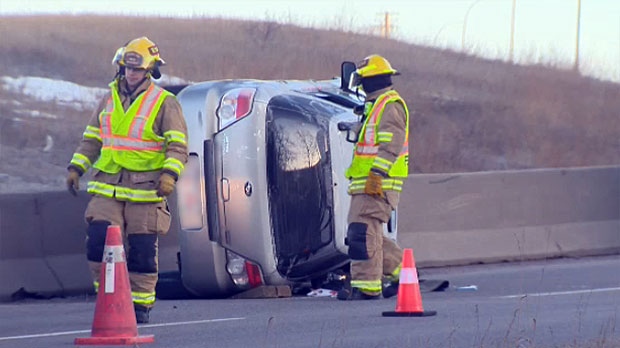 CALGARY — The number of accidents on Calgary roadways has fallen sharply during the pandemic, with more than 13,000 fewer crashes being reported between January and November 2020 compared to the same period in 2019, according to stats gathered by police.

“Obviously with people working at home we have less vehicles out on the road, so therefore we’ve had a corresponding decrease in the number of crashes on city streets,” said Sgt. Colin Foster, head of the Calgary police collision reconstruction unit.

Just looking at the month of November, CPS says there was a 43 per cent decrease in crashes compared to the same month a year earlier.

Dr. Eddy Lang, head for emergency medicine in the Calgary zone, says especially between late March and May of last year, ER admissions fell by about half.

In fact, he says all trauma-related injuries is down.

“With fewer people skating and fewer hockey teams playing and fewer people out and about for a variety of reasons, many of the car accident injuries did involve people travelling from one social gathering to another, all of those things are now curtailed and it’s reflecting by fewer injuries coming to the hospital,” said Lang.

The number of crashes may be going down, but CPS says severity of many has gone up.

“One of the bad things about having less vehicles on the road, (it) generally means that speed increases,” said Foster.

“And certainly in my world when I’m investigating a serious injury crash or a fatality collision, usually speed is a potential factor in that crash. Less traffic on the road, there’s more opportunity for vehicles to speed and as a result, what we’re seeing is there may be less crashes, but what we’re seeing is that when we do have a crash, the severity tends to be a lot worse.”

The Insurance Bureau of Canada isn’t releasing statistics for 2020 collisions until later this year but says Arity, a U.S. technology and telematics company, has trends that could be applicable in Canada.

The report shows that last March and April the distance driven by drivers was down between 25 to 30 per cent, which resulted in lower claim frequency in those two months. However, while reduced driving during the pandemic led to fewer crashes, there was an increase in risky driving behaviours.

After March 13, the report found the percentage of confirmed crashes happening at speed greater than 112 km/h increased by 50 per cent during the pandemic.

Foster offered simple tips drivers can use to stay safe.

“Drive within your abilities, don’t speed, be aware of what’s on the roadway,” he said.