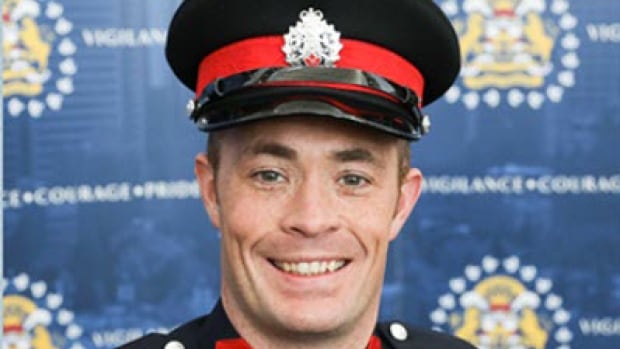 The lawyer for the younger teen accused of murdering a Calgary police officer has been notified that if convicted, the prosecution will seek an adult sentence.

A bail hearing got underway Tuesday morning for one of the two young men charged with first-degree murder in the death of Sgt. Andrew Harnett.

Harnett, 37, was killed on New Years Eve when he was dragged during a traffic stop by a fleeing SUV.

Police charged two teens with first-degree murder: a 17-year-old, who turned 18 last week and was the alleged driver of the SUV, and Amir Abdulrahman, 19, who police say was the passenger.

Although he is now 18 years old, the young man is prohibited from being identified under the Youth Criminal Justice Act.

CPS officers, the accused’s parents and sister and members of the media were in the courtroom for the hearing.

A publication ban sought by defence lawyer Kaysi Fagan protects her client’s right to a fair trial. That means no details on arguments or evidence presented at the bail hearing can be published.

Fellow officers tried to save Harnett

Around 11 p.m. on New Year’s Eve, Harnett pulled over an SUV, police say.

After speaking with the driver, who police allege is the 17-year-old youth, Harnett was in the process of issuing traffic tickets related to the driver’s graduated licence and headlights, which were not on.

CBC News previously reported that Harnett was dragged 400 metres before he was flung from a fleeing SUV.

Other officers and paramedics tried to save Harnett, but he died in hospital nearly an hour later.

Harnett’s own body-worn camera footage — which Taylor previously said would be played at the accused’s bail hearings — is expected to be critical evidence for the Crown.

Court documents show Abdulrahman was wanted on four warrants, including one for assault and three for failure to comply with court orders.