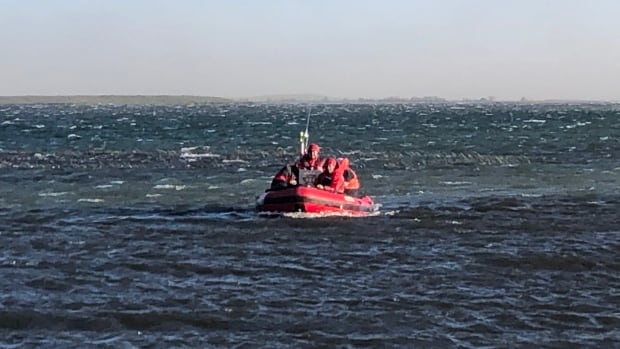 Three sets of boaters, including a family of five stranded on an island for seven hours, had to be rescued on Lake Newell due to “extremely dangerous” conditions Sunday, according to RCMP and the Brooks Fire Department.

Rescuers said winds of up to 80 km/h were causing waves as high as 1.5 metres.

“We’re glad that people want to come and enjoy the lake but if you get here and the weather conditions have changed, it’s always best to stay on shore,” said Brooks fire Chief Kevin Swanson.

Around 4 p.m., authorities received the first call for help — a kayaker from Calgary had washed ashore on the south side of the lake and didn’t know where he was.

The Brooks Fire Department was able to find the kayaker a short time later.

At 5:30 p.m., a family of five on a pontoon boat found themselves stranded on an island with little shelter from the elements.

Because of the conditions at the time, authorities couldn’t use the main launch for their rescue boats because of wind and lake conditions.

Rescuers launched a smaller Zodiak boat from a different location and, after two trips, were able to bring the family from Strathmore back to safety.

The family — all adults — had spent almost seven hours in the elements.

The third call came in around 6:30 p.m., reporting a small aluminum boat was out on the water. It blew to shore north of Kinbrook Island Provincial Park.

The man was found by Alberta Conservation Authorities and brought back to safety.

Authorities are reminding people to check local weather reports before heading out.

While on the water, boaters should be constantly monitoring the conditions.

“Lake condition can turn quickly on Lake Newell due to its size, location and lack of cover from landscape,” reads the release.

Boaters are also reminded to carry all mandatory safety equipment like life-jackets, signalling devices and bailing containers. Extra supplies like food, water, and clothing can also be helpful if stranded.

Lake Newell is south of the city of Brooks, which is about 170 kilometres southeast of Calgary.