CALGARY — Flames defence prospect Connor Mackey has never been afraid of hard work in order to get better.

Mackey wasn’t drafted into the National Hockey League but after three stellar seasons with Minnesota State University, the 24-year-old was a highly sought after free agent.

Mackey chose to sign with the Flames and it looks like the move is paying off for both sides.

On Sunday Mark Giordano was asked who he’s been impressed with from the group who was skating before camp opened.  The team’s captain went out of his way to praise the young blueliner.

“A guy like Mackey comes to mind,” Giordano said.

“It looks like he’s pretty close to being ready.”

Mackey says it was cool to hear that from a player like Giordano. He says he just wants to soak in all he can from the veteran defenceman.

“Just try to learn a lot from him,” he says.  “He’s been pretty nice to me, making me feel welcome.  He’s a heck of a player so it’s pretty cool to hear for sure.” 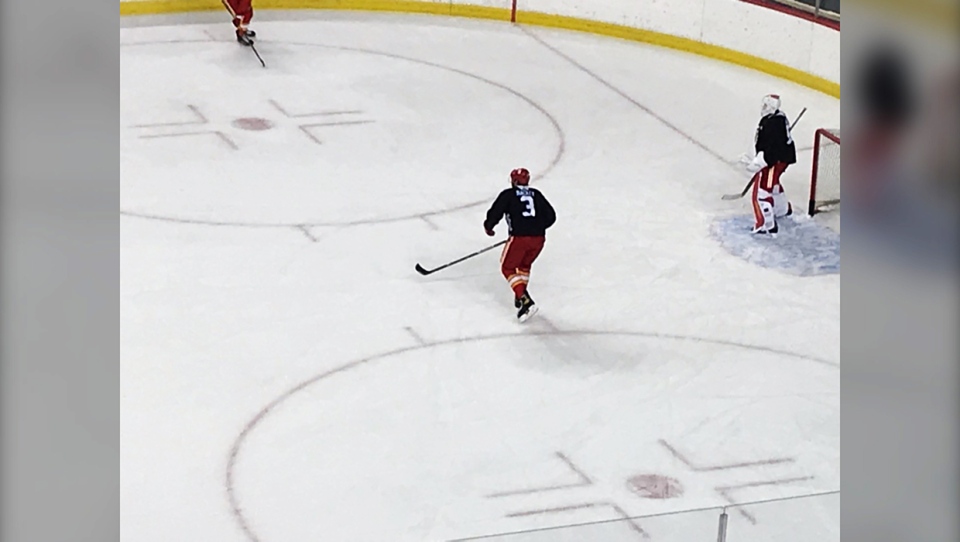 Mackey is going to do all he can to push for a job with the Flames this season.  Even if it doesn’t happen he knows he’s knocking on the door.  Mackey says he knows he’s getting close.

“Seeing those guys out there and just being in the mix with (established NHL) guys like Gio (Giordano) and Tanev and being on the same sheet as them and learning from them – it’s given me confidence,” Mackey said.

“I’m coming into camp (to) hopefully push for a job and I guess anything I can do to help this team.”

Hockey is a big part of the Mackey family.  Connor’s dad Dave played in the show with the Chicago Blackhawks, Minnesota North Stars and St. Louis Blues.

The elder Mackey was known more for his fists.  In 126 games he had 305 penalty minutes.

Although they’re different players, the younger Mackey knows his dream wouldn’t still be alive without his dad.

“He’s a big reason why I’m here,” Mackey said. “I learned everything from him.”

“You know, (it’s important learning) the things outside the game too and just how to go about everything.  Kind of just go about your business and being in the locker room, being away from the rink and all that (sort of stuff), so he’s been (a) huge (influence).”

The Flames are back on the ice Wednesday.  They’re still split into two groups and the team will play its first scrimmage on Thursday night at 7 p.m. at the Scotiabank Saddledome.