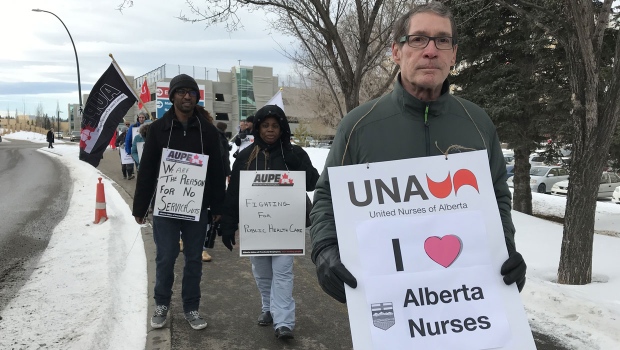 In Calgary, four different facilities saw dozens of nurses, doctors and caretakers march with their unions to demand the provincial government attention.

Many are concerned privatization and hundreds of layoffs are on the horizon after a report earlier this month recommended sweeping health-care delivery changes.

“What we’re doing is sending a message,” Karen Craik with the United Nurses of Alberta said. “We are serious about defending public health care and a publicly delivered system.”

The protests come just 10 days after that government-issued report raised alarms in the public sector. It said there is $2 billion in savings to be had in the provincial delivery.

It’s still unknown what health care will look like by the end of the year, but some say they’d be surprised if there weren’t massive changes.

The UNA says the UCP government demanded a four-year wage freeze during negotiations earlier this year.

The union also says the province is looking to cut back on overtime and premium pay, and nix multiple positions.

“When they tell us they’re going to eliminate almost 750 registered nurse and psychiatric nurse positions, we take offence to that,” Craik said. “(Patients) are going to have longer delays, longer waits in surgeries and in emergencies.”

She told reporters she thinks the only reason the UCP is needing to make changes is because of an ill-advised move outside of health.

“It’s ridiculous (health is) a place we think we need to save,” Notley said. “We did not need to give $4.7 billion away to profitable corporations so they could give it to shareholders who don’t live in the province.”

In a statement, Ministry of Health press secretary Steve Buick said that his government has “great respect for the work Alberta nurses do,” and that “reducing costs does not mean reducing care.”

Buick pointed to a high delivery cost in Alberta that is currently seeing similar wait times to other Canadian provinces.

“We campaigned on strengthening our publicly funded health system, starting with increasing access and reducing wait times,” the statement said. “Every dollar we save will stay in the system to do that.”

Throughout Alberta Thursday, protests took place at 33 locations in 25 communities.