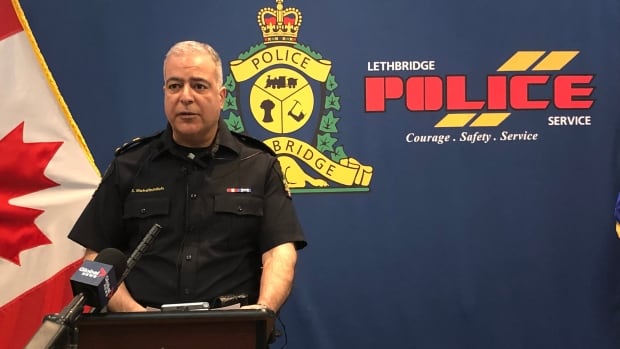 The Alberta government has told the Lethbridge Police Service to shape up or it will step in, according to the chief, who held a news conference to address “recent complaints” about LPS.

At a news conference on Wednesday morning, Mehdizadeh confirmed Madu had expressed concern.

“Yes, those comments were made,” said Mehdizadeh about the government’s threat to intervene. “But again, the justice minister was also very mindful of the fact that we have new players in the game right now, a lot of these incidents are not something that the Lethbridge Police Service is doing today.”

The chief of police also indicated that new allegations of misconduct against LPS officers are expected to be revealed in the coming weeks.

Mehdizadeh said one of the officers is currently suspended for an unrelated matter but wouldn’t elaborate.

The chief also said there will be no suspensions for the others who searched Phillips’ name without an apparent investigative reason.

In 2017, Phillips was photographed by two on-duty police officers, one of whom who posted about her online. The officers were off-road enthusiasts and the then-environment minister had proposed the phase-out of off-highway vehicle (OHV) use on designated trails in Castle Provincial Park, west of Lethbridge.

Following a Medicine Hat police investigation, the officers have since been disciplined.

But Phillips believed there was more evidence she was being watched and filed a request under the Freedom of Information and Protection of Privacy Act (FOIP).

The documents showed a civilian employee and five officers — including a deputy chief and a staff sergeant — accessed personal information on Phillips, yet no investigative purpose was given for any of the searches.

Mehdizadeh has issued a public plea for patience.

“We are working on it, we are we are trying to move through these investigations and allegations through a proper process and protocol that’s legal. So I just ask for the public to be patient.”

No plan to re-open drugging complaint

Madu said Monday afternoon “the men and women of law enforcement possess a great deal of power, and all Albertans should be outraged when that power is abused.”

Further details gleaned from the FOIP’d documents suggest officers never warned Phillips that someone reported to police that they thought the MLA was the intended target of a drugging at a bar in 2016.

“I’m sure if there was a serious concern about her safety, she would have been notified,” said Mehdizadeh.

Last month, CBC reported Bill Kaye, a retired high-ranking officer-turned victim advocate had a sexual relationship with a domestic violence survivor 33 years his junior who said the relationship was not consensual and that when she reported it to Lethbridge police, the service was dismissive of the complaint.

Victim’s advocate had sex with victim

Until he was confronted with the allegations last month, Bill Kaye was the head of a victim’s advocacy group following his retirement from LPS as an inspector with 35 years of service.

In late January, a woman in her 20s reported she felt forced into a sexual relationship with Kaye who had been assigned as her case worker in 2018.

The woman reported the relationship to the Domestic Violence Advocacy Team (DVAT) and Chinook Centre for Sexual Assault (CCSA) with both organizations immediately supportive.

But when she went to LPS earlier this year, they were set to have friends and former colleagues investigate Kaye until CBC contacted the force and asked about the perceived conflict.

Mehdizadeh said LPS voluntarily handed the case over to Coaldale RCMP despite an email from RCMP to the alleged victim explaining that Lethbridge police were keeping the file.

The southern Alberta city has been plagued with more than its fair share of controversies in recent years including the violent arrest of a teenager dressed as a stormtrooper and the emergence of a disturbing video showing an officer repeatedly driving his patrol car over an injured deer.