The Queen — or at least her portrait — is back in the Calgary city council chamber.

On Monday, workers restored it to its usual spot on the north wall of the room where council meets.

It was taken down two weeks ago as part of an effort to learn more about the painting, which was done by Montreal area artist Pamela Edwards.

The artist signed the front of the portrait as well as the year it was painted — which was 1952.

During its two week absence from the council chamber, the oil on canvas painting was given some needed care and attention.

A public art conservator with the city, Sophia Zweifel, said one of the first things they noticed when the painting was removed from the wall was that it did not have a proper backing on it.

“We figured while it was down, it was a really good time to apply a rigid backing to the reverse of the artwork.”

Overall, Zweifel said the portrait is in great condition.

At first, few details were known about the painting, including whether the city actually owns it.

Over the past two weeks, the city’s archives has continued sleuthing and came up with some letters between the city and the artist.

Zweifel said it appears then-mayor Don Mackay, was at a conference in Montreal in the early 1950s and saw paintings done by Edwards of the young Queen Elizabeth.

Mackay, who was mayor from 1950 to 1959, wanted to acquire a painting for the council chamber as an honour for the then recently crowned monarch.

Zweifel said he asked for two samples of the artist’s work to be sent to Calgary so that city council could choose one which would be put on display in the council chamber.

“The artist sent one which was an equestrian portrait of the Queen on horseback and then this one that we have here. And this is the one that they decided to go with.”

The royal portrait was given a prominent place in the council chamber in old city hall in late 1953 or 1954.

It stayed there until it was transferred to the current council chamber, which opened in 1985.

As for why the city continues to display the painting of the young queen and not a more modern painting of Canada’s head of state, it remains a bit of a mystery.

Zweifel said the painting was returned to its place without any discussion of alternatives because that is where it has resided and there has been no official decision to move it elsewhere.

While it was down, she said an appraiser was brought in to assess the portrait but that the appraisal is not being released.

Correspondence from the artist back in the 1950s indicated that the portrait would normally come with a $1,000 fee.

But Edwards wrote that given the civic purpose that the city was intending for the painting, she would be “happy to receive a reasonable offer.” 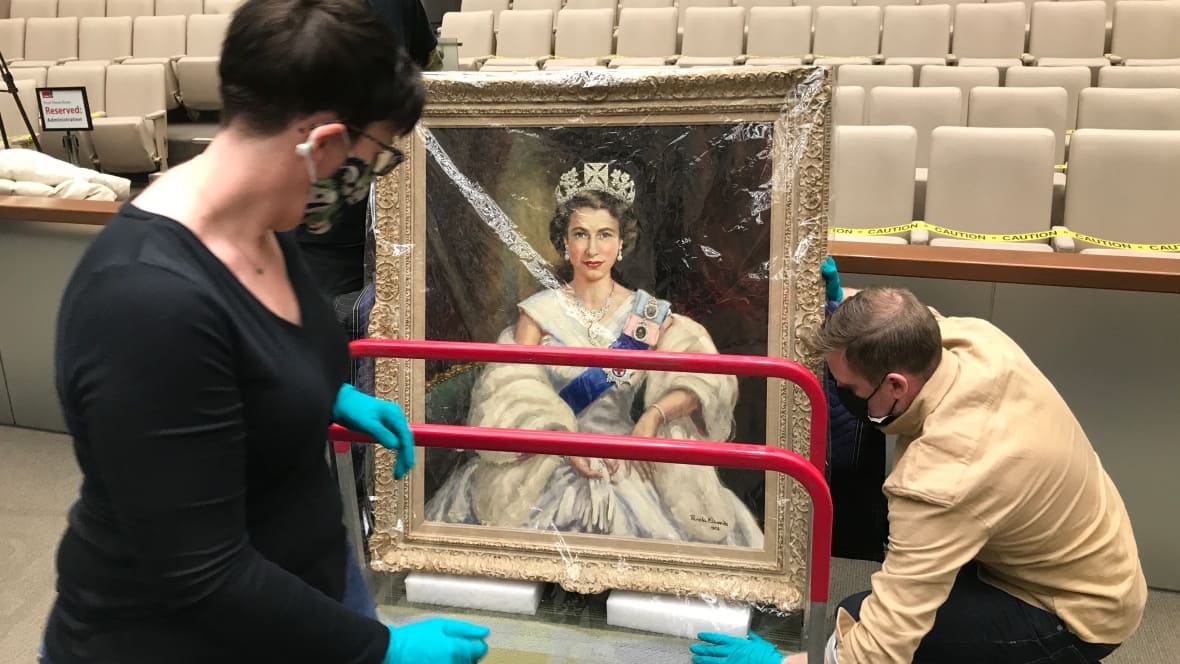 A mysterious portrait of the Queen was removed from Calgary council chamber to uncover its backstory. Find out why. 2:03

It still isn’t known what the city paid her for the painting.

Officially, the portrait has not been given an identifying number in the city’s extensive public art collection.

Zweifel said a decision has yet to be made between the city’s archives, its protocol office and public art as to who actually controls the painting for the City of Calgary.