CALGARY — As promised by many meteorologists, the province of Alberta has been plunged into a heat wave and with it; Environment Canada has issued a heat warning.

The agency issued the alert at about 3:30 p.m. Friday and said it expects the conditions to remain in place throughout most of the province until next week.

Officials say the heat wave will be “prolonged, dangers and potentially historic.”

“Afternoon high temperatures near 30 degrees Celsius on Friday will climb to the mid 30s by Sunday, and could approach 40 degrees Celsius in some regions early next week,” the advisory reads.

“Little to no reprieve from the heat is expected, as overnight lows will remain between 15 and 20 degrees Celsius.”

The bulletin is in effect for the entire province, outside of a handful of regions in southern Alberta.

All residents and visitors in the regions under the warning are advised to take proper precautions to stay safe in the extreme conditions.

They include but are not limited to:

Officials say Albertans need to monitor themselves and their loved ones for signs of heat stroke and heat exhaustion.

“(They include) high body temperature, lack of sweat, confusion, fainting, and unconsciousness,” the advisory said.

“Pay particular attention to individuals that can experience earlier or more severe effects from heat including infants, children, seniors, and individuals with pre-existing lung, heart, kidney, nervous system, mental health or diabetic conditions, outdoor workers, as well as those who are socially isolated.” 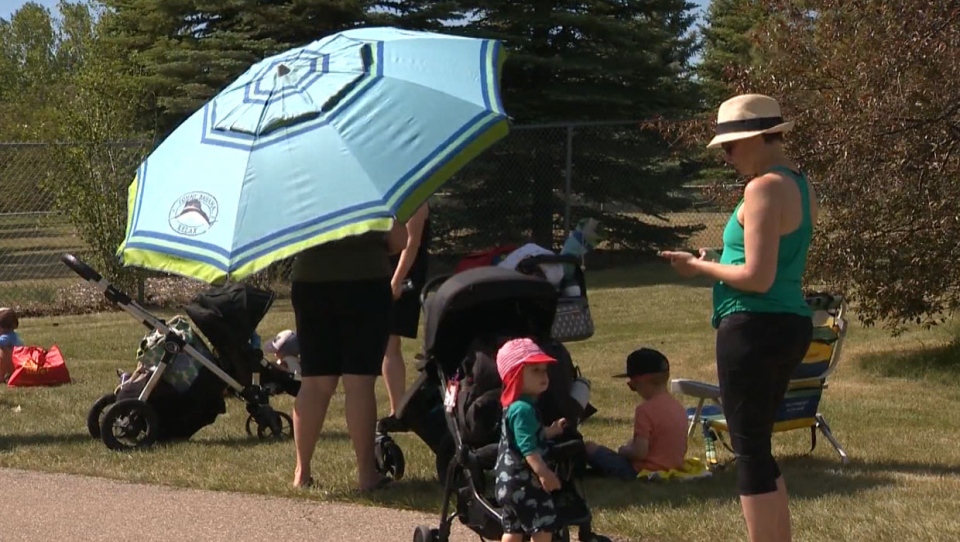 Further information on staying safe in the heat can be found online.