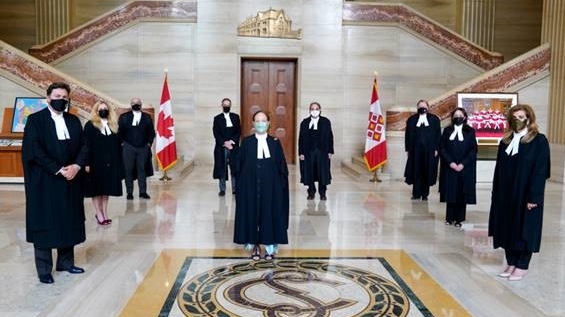 OTTAWA — Supreme Court Justice Rosalie Abella marked her last day on the bench on Friday, a day she says was filled with emotion and reflection of the long and decorated career path that got her to this point.

In an exclusive interview on CTV’s Question Period airing Sunday, Abella said she thought about her parents, her husband, and her two sons before she said goodbye to a seat she was appointed to 17 years ago.

“I thought of my kids, my amazing two sons, their wonderful wives and my grandchildren. So it was a day to think about origins, because when you come to endings you start to give yourself permission to think about the arc and where it began.”

Friday was the last hearing of the spring session and Abella’s last day, but she will officially retire on July 1, 2021, on her 75th birthday. She will continue to work on judgments for cases she’s heard for up to six months after retirement.

Abella was born to Holocaust survivors in a Displaced Person’s Camp in Stuttgart, Germany on July 1, 1946. They moved to Canada as refugees in 1950 and despite the horror they witnessed, she said her home was filled with “optimism.”

“I never, never felt anyone had a happier home than I did, notwithstanding what they’d gone through. That to me is the ongoing miracle of their life, the way they reconstituted their lives here in Canada, and the way they never stopped being grateful to the country, for all of the opportunities it gave their children,” she said.

Her quest for justice was sparked after her father, a trained lawyer, wasn’t able to practice when he arrived in Canada because he wasn’t a citizen.

“I didn’t know any other mothers who were lawyers and then when I got appointed to the bench and was pregnant with our younger son, there were no women on the Family Court bench at the time, Family Court bench, no women. So, I had no idea how this was going to work out, none, because I had nobody to look to to say, ‘You can do this, this can work.’ So, my husband and I just kind of worked together in a way that we thought worked best for us and for our kids,” she said.

In 1984, she was appointed as the commissioner of the royal commission on equality in the workforce, famously coining the term “employment equity.” Her work in that report was adopted by the governments of Canada, New Zealand, Northern Ireland and South Africa.

Asked whether it’s this accomplishment that she’s most proud of, Abella said she’s found pride in many of her legal experiences.

“I was very proud of being able to be a lawyer, having clients that I could steer towards a remedy that made them comfortable. I loved being a family court judge and learning how to judge,” she said.

“So I mean if you want me to identify one legal item, it’s, I guess it’s the chance to have had so many of those legal experiences.”

THE THREAT OF POPULISM

In 2004, she made her debut at the Supreme Court of Canada becoming the first Jewish woman to hold the position.

Years later, delivering a speech at Brandeis University in Massachusetts while accepting an honorary degree, she told a crowd of faculty, staff and graduates that she was “deeply worried about the state of justice in the world.”

She spoke about the Second World War and the commitment made by nations to “unite in democratic solidarity” to protect values that prevent war and human rights abuses.

“Yet here we are in 2017, barely seven decades later, watching ‘never again’ turn into ‘again and again,’ and watching that wonderful democratic consensus fragment, shattered by narcissistic populism, an unhealthy tolerance for intolerance, a cavalier indifference to equality, a deliberate amnesia about the instruments and values of democracy that are no less crucial than elections, and a shocking disrespect for the borders between power and its independent adjudicators like the press and the courts.”

On CTV’s Question Period, she said this concern remains top of mind.

“It is terrifying to me, because I think if there is failure of rights somewhere, there is a failure of rights potentially everywhere and the greater our tolerance becomes for abuses that we shouldn’t for a second tolerate, the less we become the world that I was born into, in 1946,” she said, adding the global community has lost the ability to enforce moral standards.

THE ROLE OF JUDGES & THE COURTS

On criticism that the courts, because of the application of the Charter of Rights and Freedoms, are taking too prominent a role in Canadian society and infringing on the roles and responsibilities of elected officials, Abella said “we never didn’t stick to our lane.”

She added that while interpreting and enforcing a set of rights might end up upsetting people, judges have “tenures, so that they can protect their impartiality, cannot be removed from office until they’re 75 for decisions they make that are unpopular because that’s not our role, we’re not there to be popular.”

Above all else, she said Canadians should be reassured by their judicial system and the judges who work within it.

“The good faith in Canada’s judges, the wisdom and the intelligence is extraordinary. I don’t have a slight hesitation, their ability to deliver justice to the Canadian public.”