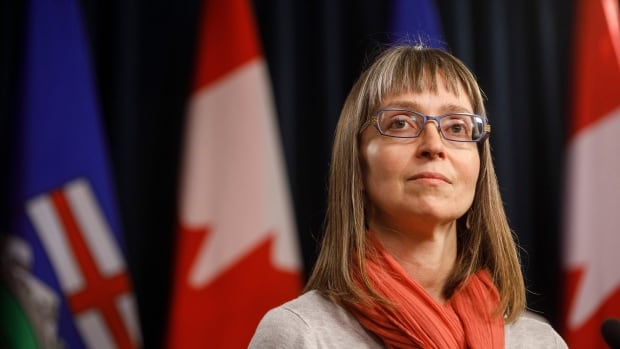 A second health-care worker, a woman in her 50s in the Edmonton zone, has died from COVID-19, Alberta’s health minister says.

Tyler Shandro made the announcement Tuesday at the government’s first pandemic news conference of the new year.

The news came just one day after the public learned the province had lost its first health-care worker to the illness, which has now claimed of the lives of more than 1,100 people in Alberta.

Shandro defended the province’s vaccine distribution system, which some critics say has been too slow. The minister said 26,269 people had been vaccinated as of Monday.

“They’re on track to do another 3,000 today,” Shandro said. “That means by the end of today we should be at about 29,000, the initial goal that we set in mid-December. It was an aggressive goal and we’re getting there only a few days later than we had hoped, in spite of the need to plan around delivery times and amounts that are consistently and constantly shifting.

“We’ll get the vaccines out as soon as we get them in.”

The minister noted the next shipment of vaccine was on the way on Tuesday and said the province is working as fast as it can.

“We were on a bad course in December but we changed it,” Shandro said.

The province is finding ways for the immunization program to be more efficient and bring the vaccines to where people who need them are, Shandro said.

AHS is doing everything it can to immunize as many people as possible, including providing immunization in the evening, on weekends, and on holidays, he said.

“They’re working across every zone to give the shots at more locations. There’s currently 45 sites across the province and more will be added as more vaccine becomes available to Alberta.”

The province expected another 13,000 doses of vaccine to arrive this week.

Alberta reported 26 more deaths on Tuesday and 843 new cases, with a total of 13,411 active cases in the province.

Across the province, 919 patients are being treated in hospitals for the illness, including 140 in ICU beds, said Dr. Deena Hinshaw, the province’s chief medical officer of health.

Tuesday’s news conference came as Premier Jason Kenney’s government tries overcome a scandal of its own making, after news emerged that a cabinet minister, the premier’s chief of staff and several other MLAs travelled outside the province or the country over the holidays.

Kenney on Monday accepted the resignations of Tracy Allard as minister of municipal affairs and of his chief of staff, Jamie Huckabay.

The premier also demoted five other United Conservative Party MLAs who travelled internationally over the holidays.

Against that backdrop, Hinshaw held her first post-holiday news conference at 3:30 p.m. Tuesday.

You can watch it here live.