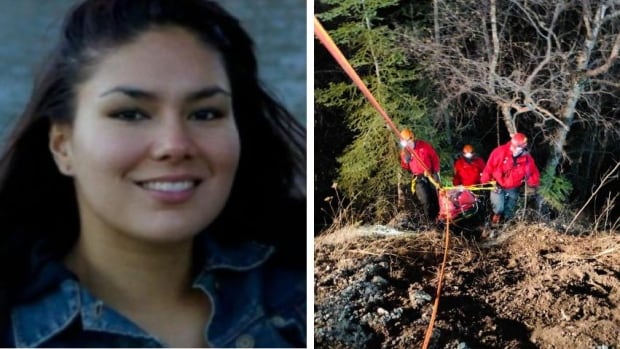 The last thing Patricia Paul remembers is the feeling of falling.

The 44-year-old woman from Canmore, Alta., was exploring Whiteswan Lake Provincial Park, B.C., on the evening of March 27, when she realized the icy terrain was difficult, she didn’t feel safe and she wanted to turn back.

She expressed her concerns to the group she was with, who knew the area better than her, but said she wasn’t taken seriously.

What happened next, she isn’t sure — the head trauma makes her memories come in flashes. She heard a voice in her head, telling her to roll like she used to roll down hills as a kid — protecting her head.

“I remember hitting rocks … I remember holding my head and trying to pay attention so that I could protect myself and stay awake. I think I was going in and out of consciousness. I remember being in the water and having to roll over, and being in extreme pain,” she said.

Paul has pieced together a version of events based on what others have told her. She said she was told the others proceeded ahead without her, until they heard a scream.

She said police got a call around 10:45 p.m., and Columbia Valley and Kimberley Search and Rescue Teams headed out to the site where they worked, late into the night, to use ropes to raise her 100 metres up the steep, treed slope, before airlifting her to hospital.

She was put on life support, with her ribs broken, right forefinger broken and tendon severed, other fingers broken, and a broken vertebrae in her neck — not to mention severe head trauma that saw her skull exposed, and road rash and bruises all over her body.

Nobody contacted her family. But, by chance, two fishermen spotted her purse the next day — covered in blood. They contacted her loved ones, who were able to track down the hospital where she was being treated.

“I remember like the team of nurses and doctors waking me up and telling me what had happened. I was just waking up from surgery and that my sister and mom were coming to visit me,” she said.

‘I could have died’

“I still haven’t fully absorbed all of it … I think I’m still in shock,” she said.

“I’ve had some brief moments where I’m just like, oh my God, I just about died. When I think about all of the what ifs, like … I could be paralyzed, I could have lost a limb, I could be in a coma, I could have died.”

She joked that she’s feeling pretty tough — but she definitely doesn’t want to test her fortitude again.

Paul faces a long recovery. She’s out of hospital, but it’ll be weeks until her hands have healed enough for her to resume work, and she has extremely limited mobility, requiring more home care than Alberta Health Services is currently able to provide.

Her sister has started an online fundraiser in her name to help with her expenses.

Despite everything, Paul said she’s feeling luck and gratitude.

“This sounds like the worst luck a person could have, but going through this, and all of the help I’ve received — the doctors, surgeons and nurses and saved my life, and the search and rescue teams (like, they’re volunteers) — they came and they saved my life!” she said.