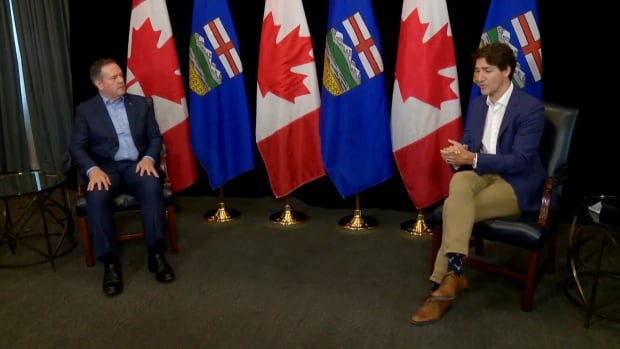 Prime Minister Justin Trudeau isn’t pulling any punches as he tours the Conservative heartland in Calgary.

Responding to a question about climate change and economic opportunities for Alberta on Calgary’s Red FM Wednesday morning, he said his government has taken steps that will help prepare the country for the future, such as the national price on carbon.

“There’s a tremendous opportunity in the fact that some politicians here in Alberta have been fighting against even recognizing the climate change is real, has slowed down Alberta’s ability to prepare for the economic future and the jobs of the future,” said Trudeau.

On the eve of the prime minister’s visit, federal Environment Minister Jonathan Wilkinson also went on the offensive, singling out Alberta Premier Jason Kenney on Twitter for opposing Ottawa’s decision to label all plastics as toxic.

“With only 9% of plastics being recycled, it’s time the Premier understands the environmental harm that comes from more than 3M tonnes of plastic worth $7.9B being thrown out every year. We’ll continue our climate & economic leadership and will always welcome the Premier to join,” he wrote.

Kenney’s government has looked to the petrochemical industry, including plastics, as a growth opportunity for the province. It introduced a new grant program to help encourage the industry that could pay out billions of dollars.

That program replaced a royalty credit program for petrochemical companies established under the previous NDP government.

Trudeau also jumped at an opportunity this morning to tout his government’s work against racism and to attack the previous Conservative government, which Kenney served as a cabinet minister.

“I have recognized systemic racism and discrimination and fought against it from the very beginning of my being elected as prime minister, protecting people’s rights, protecting minorities against Stephen Harper’s Conservatives, who were talking about banning niqabs,” he said — a direct reference to a policy championed by Kenney to forbid face coverings at citizenship ceremonies.

The prime minister met with Kenney later in the morning; it’s not known what the two leaders discussed. The two held a photo opportunity after the meeting but took no questions.

“A lot of projections suggest we’re going to lead the country in growth and I look forward to talking to you about ways that we can make that happen, so Albertans who have been unemployed or underemployed for two years can get back to work. And I sure hope we can find common ground on that growth agenda,” Kenney said during the photo op.

Kenney has seen his popularity plummet since first being elected in 2019. Multiple polls over the past few months have said he is among the least-liked premiers in the country. Other surveys have suggested his United Conservative Party is trailing the Opposition NDP.

Likewise, federal Conservative leader Erin O’Toole has been struggling, even in the Conservative stronghold of Alberta.

A recent survey conducted by Janet Brown Opinion Research, on behalf of CBC News, found just 11 per cent of Albertans had a favourable view of O’Toole, putting him behind Trudeau and NDP Leader Jagmeet Singh.

Trudeau rebuffed questions about whether his tour across the country signals a federal election is coming soon. He did say it’s important for Alberta to have a voice within government.

“Having strong Liberal voices, in our caucus or around the cabinet table, was key to getting big things done for Alberta. Buying the Trans Mountain pipeline and getting it built happened because we had Amarjeet Sohi around our cabinet table fighting for that,” he said.

The Liberals currently have no MPs from Alberta.