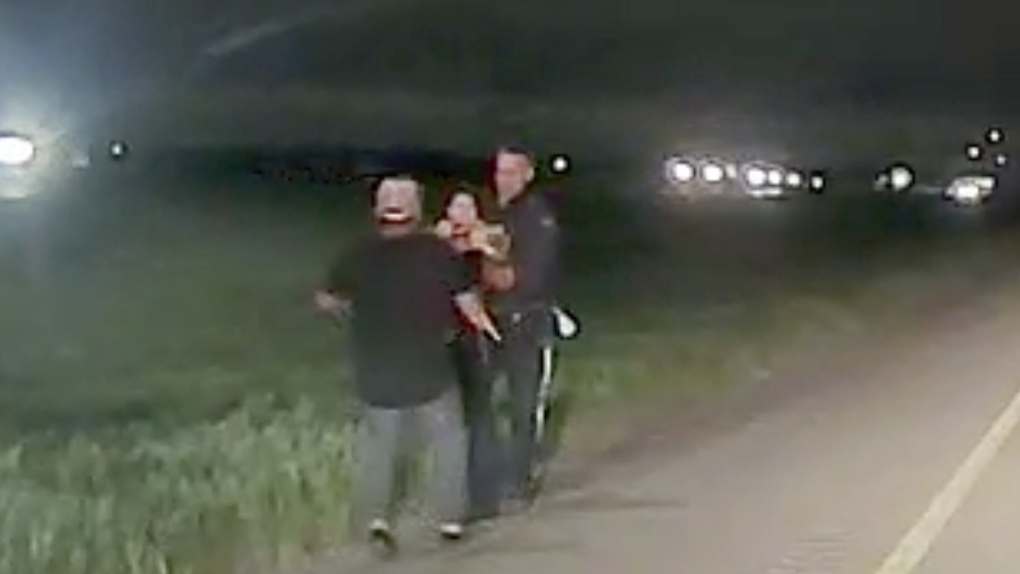 A five-month-old child is back safe with family members and a 27-year-old Calgary man is facing charges after a car was stolen from Strathmore, Alta. with the infant inside.

It happened just before 10:30 p.m. on Saturday when police said a couple stopped for a break and were standing next to their vehicle when a man wearing a reflective vest jump inside and sped off.

“One of the occupants was able to flag down a passing vehicle and followed while relaying information to RCMP dispatch,” police said.

“With the information provided, responding Strathmore members were able to close in on the vehicle’s location while Calgary Police Service HAWCS helicopter moved into a position to monitor.”

After reaching an overpass at Highway 1 and Highway 9, the vehicle stopped and the thief removed the child from the vehicle, placing them on the side of the road before again speeding off.

“One of the responding Strathmore members rushed in and swept the infant up from the highway. The infant was reunited with the complainant as they arrived on scene with the Good Samaritan who initially followed the suspect vehicle,” police said.

HAWCS continued to follow the stolen vehicle along Highway 1 and onto rural roads in the area of Township Road 243 and Range Road 281, near Chestermere.

There the suspect reached a gate at a new development and the vehicle became stuck.

The man then got out and tried to run, but was apprehended by police.

Tejinder Brar, 27, is charged with:

“Police do not normally advise the public to chase or follow stolen vehicles as it creates a high risk situation where everyone involved could be seriously injured or worse,” RCMP said in a release.

“This situation however differed in consideration of the safety and well-being of an innocent child who thankfully was recovered unharmed.”