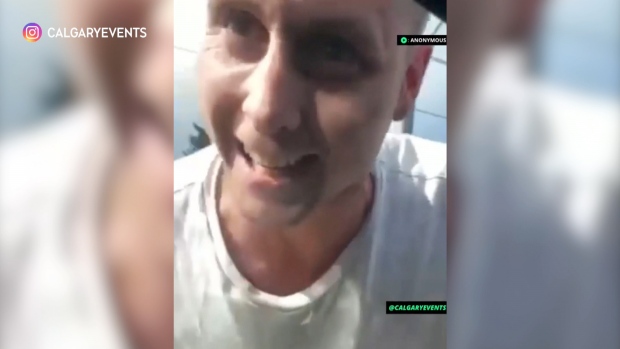 CALGARY — Calgary police have charged a man following a road rage incident that investigators are also looking at as a possible hate crime.

Police say Tamer Abu Hassira was driving on Bow Trail near 24th Street S.W. just before 5:30 p.m. on Wednesday and was going about 50 km/h in a 70 km/h zone. The driver of an F-150 truck began tailgating and honking the horn at Hassira.

“The driver of the car applied his brakes. The driver of the truck drove in front of the car where he came to a complete stop. The man got out of his truck and approached the car, yelling profanities and pounding on the car window with a fist,” police said in a release.

“He returned to his truck, backed up against the flow of traffic and positioned himself behind the car while continuing to yell out his window.”

Police said Hassira attempted to drive away but the driver of the truck again pulled in front of his vehicle and stopped.

“The truck driver exited his vehicle and again began to bang on the car window while continuing to yell profanity, vague threats and derogatory comments,” police said.

“The man then called the car driver a ‘terrorist’ and stated he had a picture of ‘Allah and Muhammad’ in his truck, before ripping the windshield wiper off the car. The suspect returned to his vehicle and drove away.”

Through a translator, Hassira described what happened.

“He decided to stop him and threaten him, abuse him, damage his car and utter hate-related abuse and slurs toward Tamer,” said Rayed Abusalim.

Officers arrived soon after and the man was able to show them a recording of the incident made with his phone.

A suspect was identified and arrested at his home.

“Although the initial altercation is believed to have resulted from a road-rage incident, we are investigating whether hate-motivated bias contributed to the ongoing interaction,” police said.

Alex John Hudson, 27, has been charged with mischief to a motor vehicle. He is scheduled to appear in court on July 7.

“Incidents where a person is targeted for their race or culture have a significant impact on not only the victim, but the broader community as it can impact their sense of safety. We take these concerns very seriously and work with our various cultural and racialized communities to offer support while the investigative process is underway,” said Senior Const. Craig Collins, hate crimes coordinator with the Calgary Police Service.

Evidence of hate motivation would be considered by the court as part of sentencing if someone is found guilty.