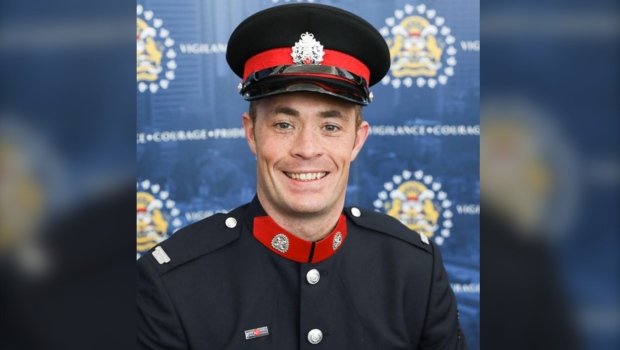 CALGARY — The Calgary Police Service is thanking the community for their support and condolences in the wake of the death of one of their members this week.

“We cannot fully express how immensely grateful we are for the outpouring of community support we have received following the tragic loss of Sgt. Andrew Harnett,” wrote Calgary Police Chief Mark Neufeld in a statement Saturday.

“There is no doubt we are all feeling this loss, but please know this community support is helping us all navigate this difficult time. Knowing you are thinking of Andy, his family and our policing family, when you yourselves are dealing with all of the uncertainty and challenges of the past year, is comforting to say the least.”

Sgt. Andrew Harnett was killed while conducting a traffic stop on a vehicle in Falconridge early Dec. 31.

According to police, he had stopped a vehicle over a licence plate issue and, during the course of the investigation, the driver fled the scene, striking Harnett in the process.

Officials say the officer was dragged and suffered fatal injuries as a result. Despite the attempts to save his life by fellow officers and paramedics, Harnett succumbed to his injuries in hospital.

A manhunt for the two suspects, identified as a 17-year-old and a 19-year-old who were known to police, resulted in the pair eventually turning themselves over to authorities a day later.

Officials say the suspects did appear before the Justice of the Peace Saturday morning, who ordered that both remain in custody until their next court appearance on Jan. 4.

The CPS also said it’s heard from a number of Calgarians who are seeking to do more to support Harnett’s fellow police officers, even when the COVID-19 restrictions remain in place.

Officials say several communities have already tied blue ribbons on their homes to show their support for Harnett’s family and stand with police. They encourage that movement in other neighbourhoods as well.

“It means the world to our officers to see these displays while they continue in their duties during this difficult time. Thank you to those who begun this campaign, and to those who have taken part,” the CPS says.

While Harnett’s family is still coping with Andrew’s loss, they are not yet ready to offer a full statement, police say.

However, those that wish to reach out with personal messages for his family can do so by contacting the Calgary Police by email.

The investigation into the incident is still ongoing and there are no further updates at this time.

Anyone who has information about this case is encouraged to call the call Homicide Tip Line at 403-428-8877, or through Crime Stoppers anonymously through any of the following methods: