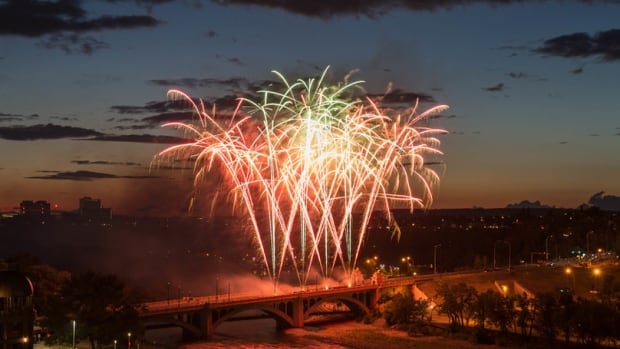 After two years of pandemic-restricted Canada Day events, the celebrations in Calgary will look much similar to years past, with events scheduled at three new downtown locations.

Here’s a look at what’s open, what’s closed, and what’s scheduled to take place during Canada Day in Calgary this year.

Calgary Transit will be running a Sunday level of service today. The agency’s call centres and customer service centres will be closed. You can use the agency’s trip planner to determine whether your travel will be affected.

There will be a number of road closures around Calgary today. A section of Memorial Drive will be closed for recreational use.

As events will be taking place at East Village, Ramsay and in downtown Calgary, a number of other road closures will also take place.

In the East Village, the following roads will be closed from 6 a.m. to midnight:

In downtown Calgary, from 9 p.m. to 2 a.m., the following roads will be closed:

Parking will be free at on-street ParkPlus zones and at certain Calgary Parking Authority parkades. Holiday rates will be in effect at select surface lots, while regular rates will apply at Lot 24, the Calgary Zoo, TELUS Spark and Heritage Park.

The impound lot will be closed.

The Glenmore Resevoir will be open from 10 a.m. to 7 p.m., and canoe rentals will be available.

A live fireworks show will take place at 11 p.m., with a soundtrack provided by CJSW 90.9 FM. Artists lined up on that soundtrack include Michael Bernard Fitzgerald, DJ Shub and The Tragically Hip, among others.

Before the fireworks, a blessing from Stoney Nakoda Elder Cindy Daniels will take place with a moment of silence to recognize children who died and are still missing after being taken to residential schools. Calgary Mayor Jyoti Gondek will also deliver a message prior to the fireworks.

Calgarians can see the fireworks in person as they are launched from Calgary’s municipal building, or they can watch the livestream.

The city has scheduled a full day of events for Canada Day.

Fort Calgary will host an Indigenous showcase and a powwow. Food trucks will be on site, and CBC’s Angela Knight will emcee a lineup of all Canadian musicians on stage.

St. Patrick’s Island will host a variety of family-friendly attractions, including buskers, stilt walkers, stage performers and face painters. There will also be craft and activity tents.

Olympic Plaza will also host musicians all day, with jazz, Indigenous and country acts promised. Arts Commons will also host an arts event at that location.

Plenty of Calgarians will also likely head out of the city for Canada Day.

The Canada Day long weekend is generally one of the busiest times of year for visitors to the town of Banff, and officials say those planning on making the trek should expect plenty of congestion and should make a back-up plan.