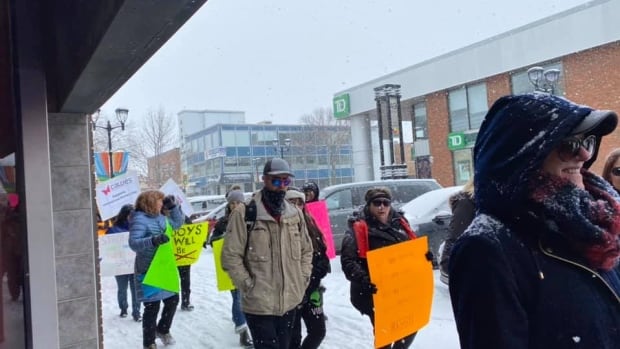 CBC Edmonton and CBC Calgary have teamed up to launch a pop-up Red Deer bureau to help us tell your stories from central Alberta. For the next month, reporter Heather Marcoux will bring you the news from Red Deer and the surrounding area. Story ideas and tips can be sent to heather.marcoux@cbc.ca.

It’s been one year since Red Deer’s first women’s march saw more than 100 Albertans marching in the snow in support of gender equality, and while COVID-19 restrictions have changed the way women share their stories, the momentum of the intersectional march continues.

The Red Deer Women’s March was led by Dieulita Datus and Sadia Khan, two women of colour who had just founded Ubuntu, an organization dedicated to mobilizing equitable participation for all central Albertans.

“The women’s march was really creating that space and saying, why are we not doing this in Red Deer?” says Khan, who launched Ubuntu with Datus on March 7, 2020, the day before the march.

“It was really the moment we thought that we were going to begin to make the official start of our organization,” says Datus, who adds that the pandemic actually sped up the process.

Datus and Khan spent much of the last year building their organization, which addresses inequality, racism and discrimination in central Alberta.

A year into Ubuntu, Datus and Khan are not organizing a march this year, as COVID-19 restrictions continue, but they are moving forward with their biggest project to date: Highlighting the stories of women  from all over central Alberta.

The project, called The Central Alberta 40 Collective, launches online at the end of the month, showcasing the stories of women and gender diverse people from the area. This builds on the presentations made at last year’s march, says Datus.

“We had a woman from the Syrian community, we had trans women, we had women-led organizations, we had women to talk about homelessness in central Alberta. We tried to present various diverse pictures of what it really means to be a woman or non-binary folks as well. And so that has looked different because we haven’t been able to get together.”

Thanks to $40,000 in funding from the Red Deer and District Community Foundation’s Fund for Gender Equality in Central Alberta, the stories collected will be presented digitally.

Ubuntu is one of seven organizations to receive money through the fund, a collaboration between Community Foundations of Canada and the Equality Fund supported by the Government of Canada.

“When it was time to determine which agencies would receive funding, RDDCF decided that rather than recruit community volunteers to adjudicate the applications we would ask the applicants themselves to make the disbursement choices,” Peden said in an email to CBC News.

“We called the gathering The Feminist Collective, asking each group to commit to a year of connecting and discussing gender-based concerns within central Alberta.”

That meant eight organizations had to take part in discussions about each project.

“As an employee of a funding agency that has traditionally shaped how the grants would be disbursed, it was a significant and inspiring experience,” Peden said.

“The Feminist Collective not only celebrated each other and the contributions they were making to gender equality, but they challenged each other when they saw areas where improvement could be made.

“Equity, diversity and inclusion were all consistent check-in points, and collective members worked to recognize unconscious bias and the unrecognized gaps that may exist within their own agencies. The collaborative deliberation approach gave traditionally marginalized sectors the opportunity to speak and advocate for equity.”

The Red Deer Native Friendship Society and Ubuntu received the largest grants, $40,000 each.

Datus says the process was filled with optimism. She points to a 2020 study titled Unfunded: Black Communities are Overlooked by Canadian Philanthropy, which found that only seven to 30 cents for every $100 donated to charitable foundations in Canada end up helping Black-led organizations like Ubuntu.

“The feminist movement has usually been white-led, and especially Black, Indigenous and other women of colour have been sort of pushed to the margins,” says Datus, who believes the intersectionality of the The Central Alberta 40 Collective is needed in central Alberta.

“Because when people think of central Alberta, people like me don’t always come to mind.”