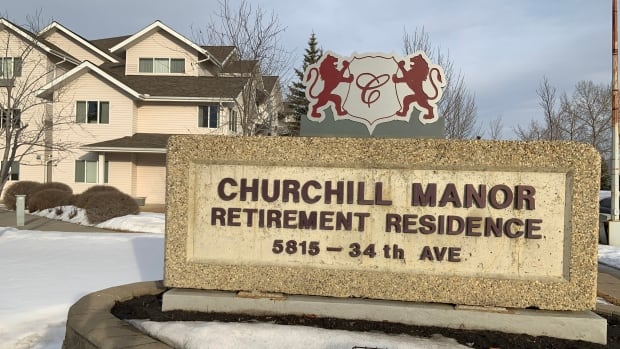 For the first time, an outbreak of COVID-19 in an Alberta  long-term care facility as been linked to a highly contagious variant of the coronavirus.

The outbreak was confirmed late on Friday at Churchill Manor in Edmonton with a single case, Dr. Deena Hinshaw, the province’s chief medical officer of health,said Wednesday at a news conference.

“This is a reminder that of course we are not out of the woods yet with respect to COVID-19, and the rapid spread that is possible with the variant,” Hinshaw said.

“Of course, it’s very concerning to see an outbreak where we go from one case to 27 within a matter of days, and it’s a reminder that all of us need to be taking the precautionary measures seriously every single day.”

Local public health teams and the operator of Churchill Manor are taking the outbreak seriously and working to limit spread and protect everyone involved, Hinshaw said.

“Last week, before this outbreak started, we implemented mandatory new protocols that are being followed. These created new, stronger measures for when a variant case is identified in any supportive living, long-term care or hospice site.

“Staff working at an outbreak site must not work at any other workplace for the duration of the outbreak, and anyone entering the facility will be required to wear a mask and eye protection continuously.”

Enhanced lab testing and rapid screening are being used help control the outbreak, she said.

Hinshaw said she did not have details on how the outbreak began. Residents at Churchill Manor got their vaccinations as scheduled on Monday, she said, as part of the rollout.

“That, of course, would not protect individuals who’ve already been exposed, but it will help those at that site to now be building their immunity, and those who haven’t been exposed would be expected to have some protection against infection and severe outcomes within the next couple of weeks.”

Now that Health Canada has approved the AstraZeneca-Oxford vaccine, she said, there will be three safe, effective vaccines to help the fight against COVID-19.

Alberta is scheduled to receive some doses of the AstraZeneca vaccine next week but those shipments will likely be small, Hinshaw said, and no details are available yet about who will be eligible for those inoculations.

“We are still working to confirm exactly how many doses we will receive, and when they will arrive. We hope to update you soon on how these vaccines will be distributed here in Alberta.

“What’s clear is that all three of these vaccines reduce the risk of getting COVID-19 and prevent serious outcomes, including hospitalization and death,” Hinshaw said.

About 255,000 doses of vaccine have been administered in the province, and more than 89,000 people have now been fully immunized with two doses, she said.

“In the last week alone, we have administered almost 20,000 doses of vaccine,” Hinshaw said. This is great news for our most vulnerable Albertans and those who care for them.”

Hinshaw also announced that Alberta will join other provinces in adopting the National Advisory Committee on Immunization recommendation to extend the period between the first and second doses of COVID-19 vaccines.

In an effort to protect as many people as possible as quickly as possible, starting on March 10 those who book a first dose of vaccine will have their second-dose timeline extended to up to four months, Hinshaw said.

Those who already have second-dose appointments booked will go ahead as scheduled. Anyone who books their appointment before March 10 will be able to book a second appointment within the 42-day window.

From March 10 on, people who book vaccinations will only be able to book their first appointment, and will later receive a reminder  to book a second dose, she said.

“The evidence on COVID-19 is constantly evolving, and it is critical that we use the most up-to-date information as we refine our approach,” Hinshaw said.

Recent research in Canada suggests that one dose of vaccine can provide about 80 per cent protection against infection, she said. Data from the U.K. released this week suggests 70-per-cent effectiveness from a single dose of Pfizer, a level of protection that remained at a stable level over several months.

“This change will significantly increase how quickly we can offer Albertans the protection of their first dose,” she said. “The more people that we can offer this protection to in the coming weeks and months, the more effective we will be at stopping spread.

“At the same time, second doses are still important, and we are recommending that every Albertan receive one within the 16-week window in order to provide long-lasting protection. This change is about providing the most benefit to the most people, based on evidence that we have seen from around the world.”

Across the province, hospitals were treating 251 patients with the illness, including 48 in ICU beds.

About three per cent of Albertans (134,052 cases) have contracted COVID-19 since the pandemic began a year ago.

Over the past year, the province has closed down twice. With new cases and hospitalizations declining, Alberta is once again starting to ease restrictions.

Alberta reported two more deaths and 257 news cases on Tuesday. Hospitals were treating 261 patients for the illness, including  54 in ICU beds.