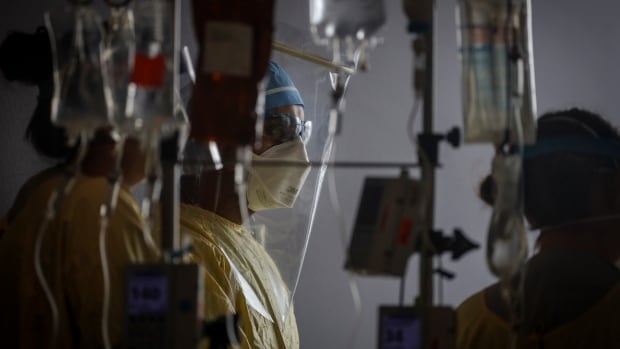 Dr. Shazma Mithani remembers being asked if she felt optimistic back in January.

Multiple COVID-19 vaccines had been approved for use in Canada, health-care workers were starting to get immunized, and the pandemic’s second wave had peaked.

“I remember using the words that ‘there’s this light at the end of tunnel, that we’re almost there, that there’s hope.’ And then unfortunately we had the third wave,” the Edmonton emergency room physician said in an interview Monday, during a break between working busy long-weekend night shifts.

Declining COVID-19 numbers across the province are encouraging, but Mithani and other Alberta doctors are cautioning against easing public health restrictions too soon.

On Monday, Premier Jason Kenney hinted that an announcement about reopening could be coming this week.

“With Covid numbers coming down, kids will be back to school tomorrow, and we’ll have exciting news this week about the great Alberta summer that lies ahead!” the premier tweeted.

Happy Victoria Day! The weather’s not cooperating everywhere, but I hope you’re enjoying the long weekend.<br><br>With Covid numbers coming down, kids will be back to school tomorrow, and we’ll have exciting news this week about the great Alberta summer that lies ahead! <a href=”https://t.co/BaFjpvitPR”>pic.twitter.com/BaFjpvitPR</a>

Mithani said she sees reason for hope and optimism as immunization expands and case numbers drop, but she worries aggressive steps to reopening could derail recent progress.

“We’re not out of the water, there’s still potential for another wave of COVID if we don’t do this right.”

On Monday, 452 new cases were reported, bringing the total active cases to 13,608. The testing positivity rate was 8.8 percent.

Between May 10 and May 16, the R value for Alberta was less than one, which means the rate of transmission declined during that period. Vaccine coverage has also greatly increased since the end of the second wave: on Feb. 1, Alberta had administered 106,254 doses; as of Monday, the province has administered 2,506,919.

Dr. Lynora Saxinger, an infectious disease expert at the University of Alberta, said declining case numbers show the public-health restrictions currently in effect are working. But that relief hasn’t yet hit the province’s intensive care units.

“The ICU capacity is still running very, very high and above its usual capacity by quite a bit with a lot of COVID cases,” she said. “I think that the health-care system definitely is showing some signs of strain still, but at least we can look at these numbers and see that it is going to be getting better over the next couple of weeks.”

“We know that if we can keep the lid on for longer and bring the case numbers down lower before starting to release everything, our odds of success of not having another wave  … all the evidence would say our odds are much, much better if we just hold on a while longer,” she said.

Saxinger said keeping the pace of immunization rolling at its current rate will help cut down case numbers even more quickly, and keep the virus from rebounding into a fourth wave when it is time to lift restrictions.

Dr. Chuck Wurster, an emergency room physician in Sherwood Park, said the drop in active reported cases has corresponded with what he and his colleagues are seeing, fewer people show in the ER with new symptoms of COVID-19.

Wurster is also concerned about getting overconfident about current numbers. He said immunization rates may plateau or easing current public-health restrictions too early over the next few weeks could send Alberta into another wave.

“I think we’ve been a little bit overconfident in how successful we’ve been,” he said.

Wurster said he’s especially concerned that schools will be returning to in-person instruction this week.

“I think we’re just going to end up in the same cycle we’ve been in — we’re just making progress, we’re just turning the corner, and then we do a 180-degree turn and then it gets worse again,” he said.