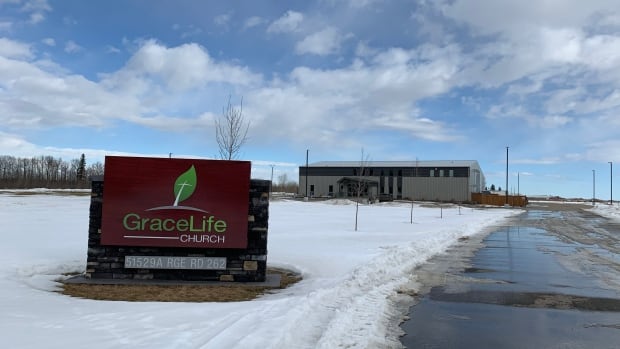 At least one Calgary church leader is praising the decision by Alberta Health Services to shut down GraceLife Church west of Edmonton, after its pastor and congregants repeatedly defied public health orders for months.

Fences were put up around the building on Wednesday after months of non-compliance with COVID-19 restrictions and charges pending against GraceLife pastor James Coates.

In a media statement, AHS said it “physically closed” the building and has prevented access until the church “can demonstrate the ability to comply with Alberta’s chief medical officer of health’s restrictions.”

“I think it was long overdue and it needed to be done,” he said of the closure.

Glatz says his church has increased its online offerings and that most churches have found ways to combine compliance with health regulations and faith.

Other churches, including Fairview Baptist Church in southeast Calgary and the Street Church in the city’s downtown, have gone the route of GraceLife and actively opposed health restrictions.

Fairview Baptist and its pastor have been issued four tickets for continued violations.

Others have condemned the closure of GraceLife, including the United Conservative MLA for Peace River, Dan Williams.

“We cannot allow churches to be barricaded in our society,” he said on Facebook, echoing concerns by others in some of Alberta’s faith communities.

In an email, AHS told CBC News it respects the important role of churches in the lives of congregants and communities, and that enforcement is always a last resort.

AHS previously said it attempted to work collaboratively with the church for months to address ongoing public health concerns.

“I’m always sad to see a church get closed down, and I certainly don’t want to see that become a common thing,” Glatz said.