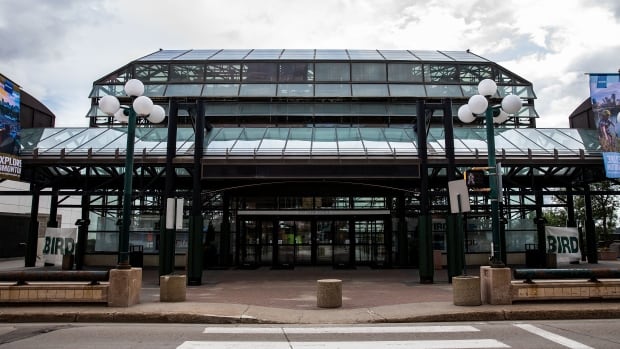 The temporary pandemic shelter Tipinawâw at the Edmonton Convention Centre on Jasper Avenue will remain open until the end of April, city council agreed unanimously at a meeting Thursday.

The extended operations will cost $2.2 million, an amount available in a COVID-19-specific fund set aside in the city’s stabilization reserve. This is in addition to the $8 million the city invested in the shelter last fall.

The 24/7 shelter accommodates 300 people a night, with meals, laundry, shower facilities, as well as counselling and housing services.

Three agencies have been contracted to run the shelter since October: Boyle Street Community Services, the Bissell Centre and the Mustard Seed Society. The Bent Arrow Society helps with cultural programming and counselling.

Mayor Don Iveson said there’s a clear need to continue the operations through the end of the spring.

“I don’t regret at all establishing this facility,” Iveson said.

Indigenous elders gave the facility the name Tipinawâw, a Cree wording meaning shelter from outside elements.

From October 2020 to mid-February, nearly 4,200 different people accessed daytime services at the facility, and about 2,300 people used the overnight shelter, says a city report.

At the beginning of the meeting, Coun. Scott McKeen asked about security at the shelter — saying he’s received emails from residents concerned about what’s happening in the area.

Rob Smyth, deputy manager of citizen services, said there were some “significant challenges” early on and the city has been working with police and private security to increase presence around the facility.

Temporary encampments have cropped up around the shelter, Smyth noted.

“It’s not perfect, but we certainly have tried to increase our activity to make it as safe and secure as we possibly can,” Smyth said.

A second temporary 24/7 shelter at Commonwealth Stadium is being run by Hope Mission, while a third near 99th Street in the Ritchie neighbourhood is operated by the Mustard Seed.