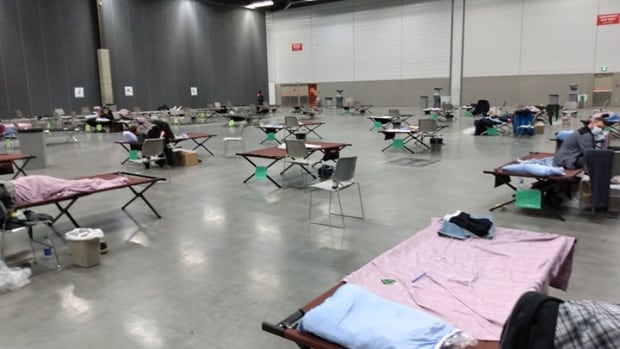 The shelter system in Edmonton may evolve as early as this summer, as agencies and the city prepare to close COVID-19 emergency shelters.

Representatives from the Mustard Seed, Bissell Centre, Boyle Street Services and Homeward Trust joined council’s community and public services committee meeting Wednesday to give their input on how they envision future services.

During the COVID-19 pandemic, many emergency facilities have been open around the clock — unlike the past practice of inviting clients in overnight and then forcing them out of the facility at 6 a.m.

Dean Kurpjuweit, executive director of the Mustard Seed, is one of many advocating for 24/7 facilities.

“Having a place for people to go all day makes a major impact on the work we can do with them to help them get housed,” Kurpjuweit told the committee.

Smaller venues around the city and longer operating hours, he argues, allow social workers to engage with clients and help them find longer-term housing solutions.

The shift in approach is on the minds of agencies, city councillors and officials, as temporary facilities wind down and they look for alternative temporary spaces.

The agencies jointly run Tipinawaw at the Edmonton Convention Centre, which consistently has 300 full beds. The Mustard Seed also runs a southside shelter of about 50 beds at Cessco off 99th Street, and Hope Mission runs the temporary shelter at the Commonwealth Stadium with about 120 beds.

During the pandemic, the Alberta government invested $10 million for shelter and short-term housing spaces in Edmonton, and $17 million for extra pandemic response, which expires the end of March.

Councillors on the committee agreed to discuss standards for shelters and are expected to delve into those details at the next council meeting the week of March 15.

Those talks could include ways to improve services and subsequently curb encampments before people resort to calling law enforcement.

“The existing shelter system isn’t conducive to ending homelessness, in many cases it’s prohibitive — this sort of mass congregate shelter where you can’t build relationships and connect with people,” Reiniger said.

Reiniger pointed to other jurisdictions which have added semi-private and private options that have successfully moved clients into permanent housing options.

In an informal survey at Tipinawaw, Reiniger said 75 of 83 respondents said they would prefer semi-private or private spaces.

Susan McGee, CEO of Homeward Trust that oversees many housing projects in Edmonton, agreed that agencies have learned a lot in the context of the pandemic.

“Physical standards that we have experienced within the case of the pandemic have resulted in clearly better services to people when they are given additional space and they are supported in having a better night sleep,” McGee said.

In the fall, Hope Mission is set to open its new Herb Jamieson Centre in central Edmonton, which will provide 400 beds.

The city has worked with Hope Mission to come up with design changes to the facility, such as a secure storage area for larger belongings like shopping carts and bikes, laundry and more flexible sleeping areas.

Christel Kjenner, the city’s director of housing and homelessness, said the Alberta government is supporting a service design committee, involving Homeward Trust and the City of Edmonton, that will make recommendations on operations at Herb Jamieson.

“It is not clear at this time what operational procedures such as continuous stay policies or medical services to help those with substance abuse disorders may be adopted,” Kjenner told councillors. “But we’ll continue to have those conversations with our partners.”

Kurpjuweit said shelters can’t continue to be a one-size-fits-all model.

“If you want to experience a shelter that is dry or sober because you’re trying to live sobriety, even though you’re homeless, you need to be in a place that’s safe for you,” Kurpjuweit said.

“The same hand if you’re dealing with addictions, you need to be in a place that’s safe for you.”