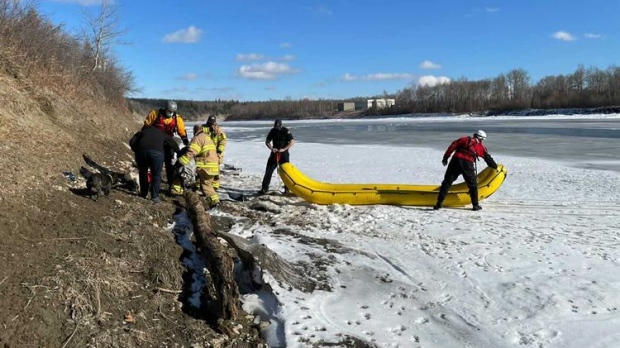 EDMONTON — Another dog was rescued from the North Saskatchewan River in Edmonton over the weekend.

Firefighters were called around 5 p.m. on Sunday to the Terwillegar dog park where a dog had fallen through the river’s frozen surface.

As seen in video captured by passerby Ryan Duplessis, two rescuers reached the pet treading water by an inflatable boat and pulled it out.

Edmonton Fire Rescue Services issued a reminder to Edmontonians to stay away and to keep their pets from the river and its dangerous ice shelves.

Several people and pets have needed rescuing from the ice this year.

A week earlier, a man was announced likely dead after he rescued a stranger’s pet near Laurier Park.