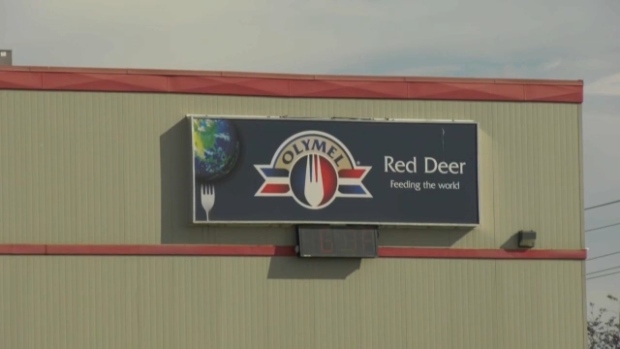 CALGARY — The federal government says the door is open to help producers affected by the closure of a central Alberta pork plant where an outbreak of COVID-19 has infected hundreds of workers and resulted in three deaths.

Olymel temporarily closed its plant in Red Deer more than two weeks ago.

The company is moving its own pigs that would normally be slaughtered at the plant to its operations in the United States to free up capacity for independent producers in Canada.

It estimates there’s a backlog of 80,000 to 90,000 animals that should be cleared within four to five weeks once the plant reopens.

Cabinet minister Jim Carr held a virtual news conference from his home in Winnipeg on Tuesday to provide an update on an emergency fund for meat-processing companies and to address the situation at Olymel.

“Last spring, when outbreaks caused plants to slow down or close, we moved quickly to help livestock producers manage the growing backlog of animals on their farms,” said Carr, who is the government’s special representative to the Prairies.

“Our government stands ready to help producers affected by the temporary closure of the Olymel plant in Red Deer, Alberta. If needed, federal funding will be there to assist pork producers with extraordinary herd management costs such as additional feed costs.”

Carr was vague when asked for details on what the assistance would look like.

“We’ll have to see what the needs are moving forward. The point we wanted to make is that the door is open for assistance if required.”

The federal government set up a $77.5 million emergency fund in September to help food processors deal with COVID-19 by adapting new safety protocols, including acquiring more protective equipment for workers. Another $10 million has been added since.

The fund is also supposed to help upgrade and reopen meat facilities shuttered due to outbreaks of the novel coronavirus.

Carr said the program has provided more than $7.8 million to 24 meat-processing companies across the Prairies, but is no longer taking applications.

“The same thing is true now as we move forward into the next phase of the pandemic.”

The meat-packing sector has been hard hit by the health crisis.

Cargill temporarily shut down plants in High River, Alta., and Chambly, Que., last year after COVID-19 outbreaks. Olymel shut down its hog slaughter and processing plant in Yamachiche, Que., and the JBS beef plant in Brooks, Alta., temporarily went down to one shift daily from two.

Cargill and JBS operations in Alberta account for 70 per cent of Canada’s beef production.

This report by The Canadian Press was first published March 2, 2021