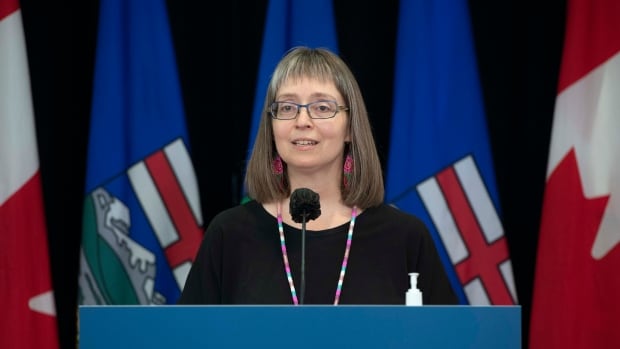 Chief medical officer of health Dr. Deena Hinshaw’s last scheduled public update was June 29. At the time, she noted daily cases, hospitalizations, ICU admissions and test-positivity rates were as low as they had been prior to the second wave.

But Hinshaw is slated to speak at a news conference Wednesday afternoon to give further details about the province’s COVID-19 situation, which has worsened since most public health restrictions were lifted on July 1.

Wednesday’s update is scheduled for 3:30 p.m. MT. People can tune in at here, CBC Edmonton’s Facebook and Twitter pages, as well as CBC Gem.

Active cases and the province’s R-value — the number of people infected by each infected person — have also risen. Alberta’s R-value was up to 1.48 as of Sunday, which is higher than during the peak of the third wave.

Hospitalizations continue to trend downwards. As of Tuesday’s update, 82 people were in hospital, including 21 in intensive care units.

Though, hospitalizations are considered a lagging indicator.

Alberta is also falling behind the rest of Canada when it comes to administering first doses of the vaccine.

According to aggregate data compiled by CBC News, 75.2 per cent of Alberta’s eligible population received a first dose of vaccine as of July 27. The national average is 80.6 per cent.

Alberta is more in line with other provinces when it comes to people getting second doses, however, with 63.6 per cent of eligible people rolling up their sleeve a second time.