Leon Draisaitl said before Wednesday’s game it’s tough to be the Edmonton Oilers’ best player with Connor McDavid on the roster.

Despite winning the Hart Trophy last season after leading the NHL in scoring, the German centre often remains at least partially in his flashy teammate’s long shadow.

But certainly not on this night.

Draisaitl registered his third-career hat trick as part of five-point performance, McDavid added a goal and two assists, and the Oilers raced out to an early lead before cruising to an 7-1 demolition of the Ottawa Senators.

Edmonton’s stars have played on the same line in the past, but head coach David Tippett had largely avoided reuniting the dynamic duo at the start of games this season until Monday’s 3-2 victory against the same opponent.

That continued Wednesday, and the Oilers were rewarded as the league’s No. 1 and 2 scorers combined to bury the visitors in the first period and move within four points of the Toronto Maple Leafs atop the North Division.

“Connor and Leon are both world-class players, and quite a bit different,” said Edmonton defenceman Tyson Barrie, who chipped in with three assists. “They go about it in different games. Leon, the way he thinks the game and the way he passes the puck on his forehand, backhand … he slows the game down, but finds guys with speed. It’s pretty incredible.

“Really grateful to get out there with those two on a nightly basis.” 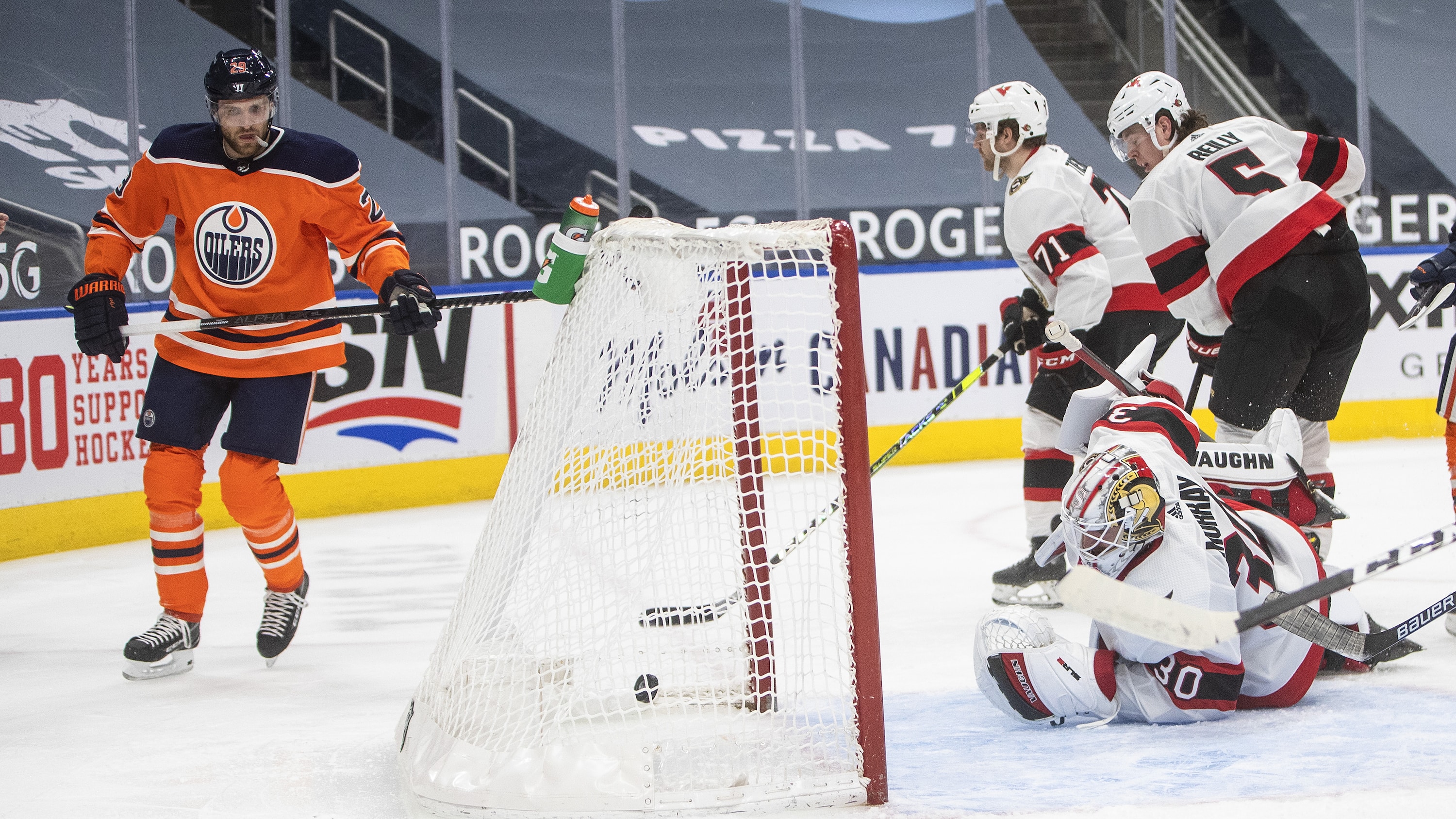 Darnell Nurse, with a goal and an assist, Jujhar Khaira and James Neal provided the rest of the offence for Edmonton (17-11-0). Mike Smith stopped 21 shots as the Oilers won their third straight and improved to 6-0-0 against the Senators in the NHL’s pandemic-shortened campaign.

Edmonton has rebounded nicely after getting embarrassed on home ice in a trio of losses to Toronto by a combined 13-1 scoreline with a 3-2 victory over the Calgary Flames and back-to-back wins over the Senators ahead of Friday’s finale of this three-game series.

“It could have been a monumental point of our season if we were going to continue to go that way or we were going to turn it around,” Barrie said. “I’m really proud of the way we responded.”

Draisaitl, who now has 15 points against Ottawa this season after a six-assist effort Jan. 13, said it was up to himself and McDavid to lead the Oilers’ resurgence.

“That’s our job as go-to guys,” he said. “It’s our job as a leadership group and collectively as a team to find our way out of it.

“Huge props to our group.”

Matt Murray, who was left hung out to dry early, stopped 29 shots for Ottawa (9-19-1), while Evgenii Dadonov spoiled Smith’s shutout bid midway through the third.

“Everyone hates losing,” Senators winger Brady Tkachuk said. “But to get blown out like that … it’s infuriating.”

Ottawa bench boss D.J. Smith, who had a forgettable milestone evening in his 100th game as an NHL head coach, was at a loss to explain his team’s lack of jump.

Draisaitl had gone eight games without a goal before scoring Monday, and sits alone in second in the NHL scoring race with 42 points, six back of McDavid.

“I’ve had chances, enough chances to score,” Draisaitl said of the last few weeks. “Sometimes they go in, sometimes they don’t.”

The Oilers came at the Senators in waves in a dominant first period with four goals in less than 10 minutes.

Nurse opened the scoring at 3:52 when his point shot tipped off Ottawa winger Austin Watson’s stick for his seventh of the season.

Edmonton made it 2-0 at 5:57 when Senators centre Colin White turned the puck over in the neutral zone. Devin Shore and Khaira raced the other way on a 2-on-0, with the latter tapping home his third.

Then with Watson in the box for goalie interference, Draisaitl blew by Ottawa defenceman Mike Reilly off the rush before depositing his 12th at 12:08.

McDavid continued the onslaught just 1:18 after that when he took a pass from Draisaitl and fired home his 16th for the Oilers’ fourth goal in a 9:34 span.

“We’re trying to get our game back in order,” Oilers head coach Dave Tippett said. “Sometimes when you get punched in the mouth, you’ve got to come back and get up off the mat and start working again.

Murray robbed Draisaitl with the glove on an Edmonton power play early in the second, but buried his 13th on the Oilers’ third man advantage at 7:01.

Neal made it 6-0 just 62 seconds later on an effort from well out that fooled Murray under his glove for the winger’s third.

Things when from bad to worse for Ottawa later in the period when White crashed into the boards on his own and wasn’t able to put any weight on his left leg.

Draisaitl completed the hat trick — and the fourth five-point game of his career — at 7:35 of the third when McDavid turned on the jets before dropping a no-look pass to his linemate to fire through Murray’s five-hole.

Dadonov scored his ninth, and 100th goal of his career, at 11:11 to break Smith’s shutout, but this night solely belonged to Edmonton’s stars — with Draisaitl leading the way.

“I wouldn’t want to be defending them every night,” Barrie said. “As a line, I can’t imagine that’s very much fun to play against.

“That would be a bit of a nightmare.”

One the Senators lived Wednesday.