EDMONTON — Rather than spend the entire pandemic winter physically distancing in their house – an Edmonton family decided to build a backyard wonderland complete with mini ice rink, decorative inukshuk and an igloo big enough for four.

Tyler Gamblin said he and his wife and two children all contributed to creating the frozen playground – and it only cost about $25.

“The kids are loving it, probably not as much as I am,” Gamblin laughed. “Their minds work pretty quick, so they’re in and out of it pretty quick, but they’re enjoying it.”

Gamblin was inspired by similar projects he saw on Facebook and researched the process by reading blogs.

It took about 50 hours to build over a month and a half – with the family freezing several blocks of ice in their deep freeze each night.

Gamblin said his wife and kids, aged 1 and 3, helped with colouring the blocks. 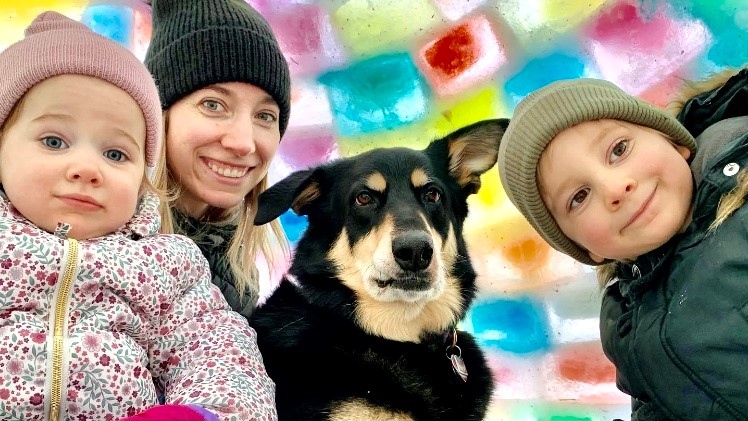 Getting the final product strong enough to hold his entire weight was a matter of trial – and lots of error.

“The hardest part was freezing the ice, with the food colouring mixing to the bottom, the ice exploding at some points in the freezing cold. The other hard part is the arches, just needing help to hold it up as it freezes together,” Gamblin said.

The word igloo originates in the Inuktitut language meaning house. Igloos are a culturally significant symbol of traditional Inuit life and are still used by some hunters and in emergency situations in Canada’s Arctic, according to The Canadian Encyclopedia.

The Gamblins are not Indigenous, but Tyler said his family has a “healthy respect” for Inuit culture – and igloo building has always been fascinating to him.

So when the pandemic hit, he decided to cross it off of his bucket list.

“We do like to be outdoors and teach them that that’s something they should cherish and hopefully they do in the future,” Gamblin said.

Gamblin is going to attempt to sleep in the igloo with his son this winter, and he’d like to travel north one day to see how Indigenous people build igloos in the Arctic.