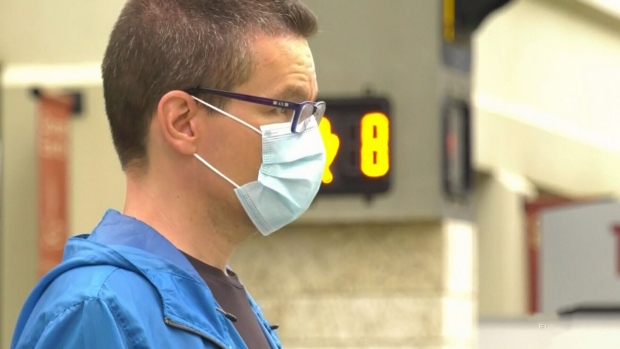 EDMONTON — A motion to deactivate Edmonton’s mandatory mask bylaw on Canada Day was defeated by one vote on Tuesday.

The motion would have ended the bylaw when the province moved into Stage 3 of its reopening plan on July 1.

Since the motion failed on the third reading, a vote will be held again on June 25 after council voted to hold a special session to debate and vote again on the motion. Initially the vote would have taken place at the next council meeting on July 5.

The first two readings passed by a vote of 7-6, with only Coun. Aaron Paquette voting “no” to approve the third reading.

The councillors that initially opposed said they preferred an alternate option — to deactivate the bylaw two weeks after 50 per cent of eligible Edmontonians had received a second dose of a vaccine. City administration estimated that would happen in mid-July.

“Votes can change; there’s still more debate to be had on Friday and I suspect that councillors will be hearing from their constituents one way or the other,” said Edmonton Mayor Don Iveson after the meeting.

“It’s not unheard of for a member of council who wishes to allow for sober second thought between second and third reading to decline to consent to having third reading happen… it’s rare but it’s not out of bounds.”

In the council meeting, Iveson referred to the situation as “messy” before council voted to hold the special meeting on June 25 to discuss the motion again.

Iveson initially voted “no” on the motion, but he said he voted “yes” for the third reading to allow for the city to provide clarity to the public.

Even with Alberta dropping its masking requirements, masking will still be required under provincial regulations in certain circumstances in cities with or without masking bylaws. That includes on public transit across the province, in taxis and in ride shares.

Several councillors expressed concern that dropping the mandatory mask bylaw would create fear for some in Edmonton, making them less likely to venture out to businesses that are opening up again.

“I think all of us, in the upcoming weeks months, will have to make very tricky decisions about risk and what are the actions that all of us can do as individuals and as families to be able to help reduce that risk,” said Sikora.

Councillors also expressed concern over the Delta variant spreading in the province.

“The preparation aspects are absolutely critical, making sure we have the surveillance, the monitoring, the health system capability to respond appropriately and accordingly but also our personal health practices to be able to keep ourselves healthy,” said Sikora.

Even once the mandatory mask bylaw is deactivated businesses could still require customers and employees to wear masks inside.

Wearing masks in public is also still being “strongly” recommended by the city, even when the bylaw has been deactivated.

On Monday, St. Albert council voted unanimously to lift local rules on Canada Day with the province. The city brought in its own face coverings bylaw in the late summer of 2020, and suspended it in December when Alberta implemented a province-wide masking mandate.

Calgary’s council decided on Monday to delay the decision on their mask bylaw by two weeks.

Mayor Naheed Nenshi called the city’s second dose vaccination rates “really good,” but said he wanted “to make sure enough people have their second dose so that when the Delta variant wave comes, most people will be protected.”

Calgary councillors will consider hospitalization and ICU numbers, case rates, and immunization progress when the conversation is revived on July 5.

According to Nenshi, Calgary Stampede organizers are planning to make masks in indoor settings mandatory.