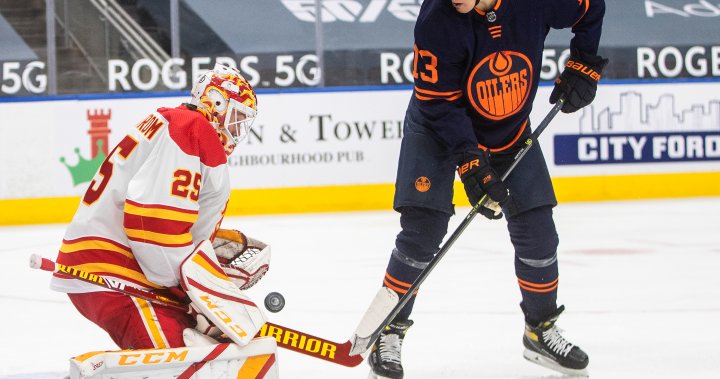 Jesse Puljujarvi scored a big goal Saturday night against the Calgary Flames and has taken big strides since the start of the season. However, the big Edmonton Oilers winger wants everyone to know he’s still a work in progress.

“I can be stronger in the corners and at the net. I can be more confident there and use my big butt,” said Puljujarvi with a grin Sunday afternoon.

“He’s probably our most consistent guy at getting to the front of the net, creating battles in front of the net,” said head coach Dave Tippett. “He’s gone through the process of just figuring out where the space on the ice is.

“He’s willing to battle to space. That’s a big factor in him coming in and playing well for us.”

At practice on Sunday, Puljujarvi was on a line with Ryan Nugent-Hopkins and Tyler Ennis. The top line featured Connor McDavid, Leon Draisaitl, and Kailer Yamamoto. That trio was put together during the win over the Flames.

“It’s a give-and-take of the balance throughout your lineup. They’re players who can drive their own line, but when you put the two of them together, they’re an awful powerful force, too,” explained Tippett. “We just have to make sure we’re using at the right times.”

Yamamoto was fined for what the NHL’s Department of Player Safety called “a dangerous trip” of Calgary’s Rasums Andersson. Yamamoto was assessed a two-minute tripping penalty on the play.