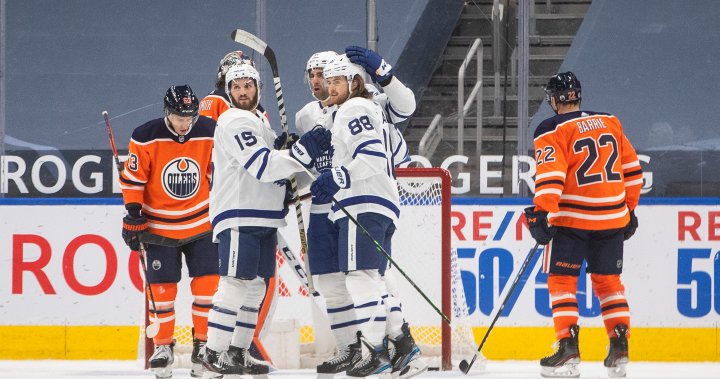 It’s the Oilers’ first three-game losing streak of the season.

“I thought we came out strong in all three games, and they find a way to get up a couple goals, and it’s the same old story,” Connor McDavid said.

“It’s very concerning that we don’t want to go grab the competitive level in a series like this,” Oilers head coach Dave Tippett said.

The Oilers had some early pressure, but again the Leafs scored first, with Jimmy Vesey beating goaltender Mike Smith halfway through the first.

Vesey took advantage of a bad line change by the Oilers to strike again early in the second. Then Leafs forward John Tavares added a power-play goal 1:47 later. Toronto’s Ilya Mikheyev made it 4-0 before the second was half done.

“They gave us a lesson that they’re probably the team in our division that’s the gold standard right now with the way they played,” Oilers defenceman Tyson Barrie said.

“I think we thought we were playing pretty good, and they showed us otherwise, so we’ve got to take a look in the mirror here and figure out what went wrong. They embarrassed us three games in a row.”

Ryan Nugent-Hopkins converted a rebound to finally end the Oilers’ goalless drought at 154:09. William Nylander replied late in the second to put Toronto up 5-1.

“We didn’t plan on losing three games in a row and not the way we did, but things like that happen in a season,” Leon Draisaitl said. “It’s an up and down season. Obviously, we’re down right now, and we’ve got to find a way to get out of it.

“It’s still not a bad run, 11-5. (We are) not happy with the three losses and the way they went on but we can’t forget about some of those positives we built,” McDavid said.

– With files from 630 CHED’s Brenden Escott