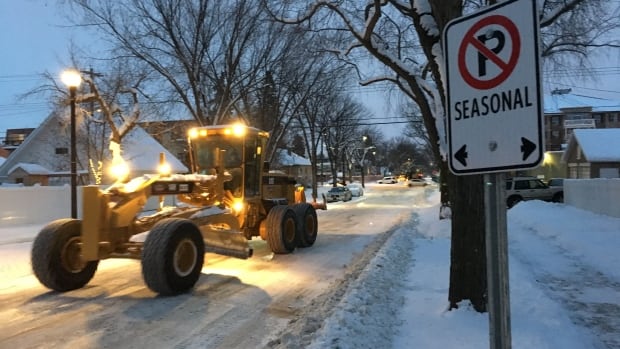 A new report says Edmonton’s snow and ice clearing program has a lot of room to improve.

In a report from the city auditor released Thursday, 12 areas were identified in which the Parks and Roads Services Branch was lacking between 2015 and 2020.

“PARS should review and update the guiding documents relating to the [snow and ice clearing] program to improve their clarity, accuracy, and consistency,” the audit says.

The audit of the snow and ice control program stemmed from an anonymous letter in February 2020 in which employees listed a number of allegations of mismanagement.

“The letter that came from a number of workers within that department to my mind were saying one, “We’ve kind of lost the plot on how to manage our roadway system’ and two, ‘we’re not being heard.’ ” Cartmell noted.

The audit points out a turnover in all levels of management  — deputy city manager, branch manager, director, general supervisors — within five years.

In an interview with CBC News Thursday, Cartmell noted the management turnover as a major issue.

“I’m not sure more change gets us any closer to the result.”

Coun. Mike Nickel said the program has had too much turnover and inconsistency.

“I count between 2015 and 2020: eight leadership changes, four to five organizational changes, seven operational model changes,” Nickel said. “How are you supposed to get anything done when you keep changing things?”

The city’s audit committee is scheduled to review the report, and ask the auditor and city operations questions at a meeting next Thursday.

The city’s snow clearing program underwent a number of operational changes in recent years, including the introduction and cancellation of the calcium chloride pilot, changes in salt and sand mixture and incorporating a 10-hour shift for clearing active pathways.

Cartmell said the shifting methods and materials over the past few years created inconsistency.

“There was this narrative of getting to bare pavement and using salt,” Cartmel said. “I still don’t think that is fully understood throughout the department.”

Cartmell said he thinks the city is misusing salt, both before and after the calcium chloride brine pilot.

“We now think we’re going to melt our way to bare pavement,” Cartmell said. “The bare pavement goal, I think, is unachievable, quite frankly.”

The audit suggests the branch should improve how it makes decisions, in part by actively engaging employees and making sure there’s open communication.

The branch needs to improve how it analyzes in-house service costs versus contracted services, the report said.

The auditor recommends the department do regular assessments of in-house versus contracted work and adjust based on the findings.

The branch should come up with a formal process to monitor staff productivity and determine whether staff are following procedures.

The city also needs to compare information with other cities, including inventory like the number of kilometres of road, materials used, like salt and brine, service levels, and budgets and spending.

The audit shows that in 2018-19 Edmonton spent 72 per cent more per lane of kilometre than Calgary, but 16 per cent lower than Toronto.

Edmonton’s cost to clear roads was comparable to Winnipeg’s, it says.

Administration acknowledged all 12 recommendations in its response to the audit.

The city operations department says it’s implementing eight of the 12 actions by the end of the year, and the remaining four will be done by the end of 2022.