See which regions are being hit hardest

Here is the detailed regional breakdown of active cases as of Sunday:

Find out which neighbourhoods or communities have the most cases, how hard people of different ages have been hit, the ages of people in hospital, how Alberta compares to other provinces and more in: Here are the latest COVID-19 statistics for Alberta — and what they mean

You can see active cases by local health area on the following interactive map. Scroll, zoom and click on the map for more information.

Retails stores and malls will be allowed increase their capacity to 25 per cent of fire code, and youth sports teams and activities will be allowed to resume with up to 10 participants, Alberta’s health minister announced Monday.

Tyler Shandro said with case counts and positivity rates continuing to decline, along with deaths and hospitalizations, it is now safe for the province to complete Step 2 of its reopening plan. 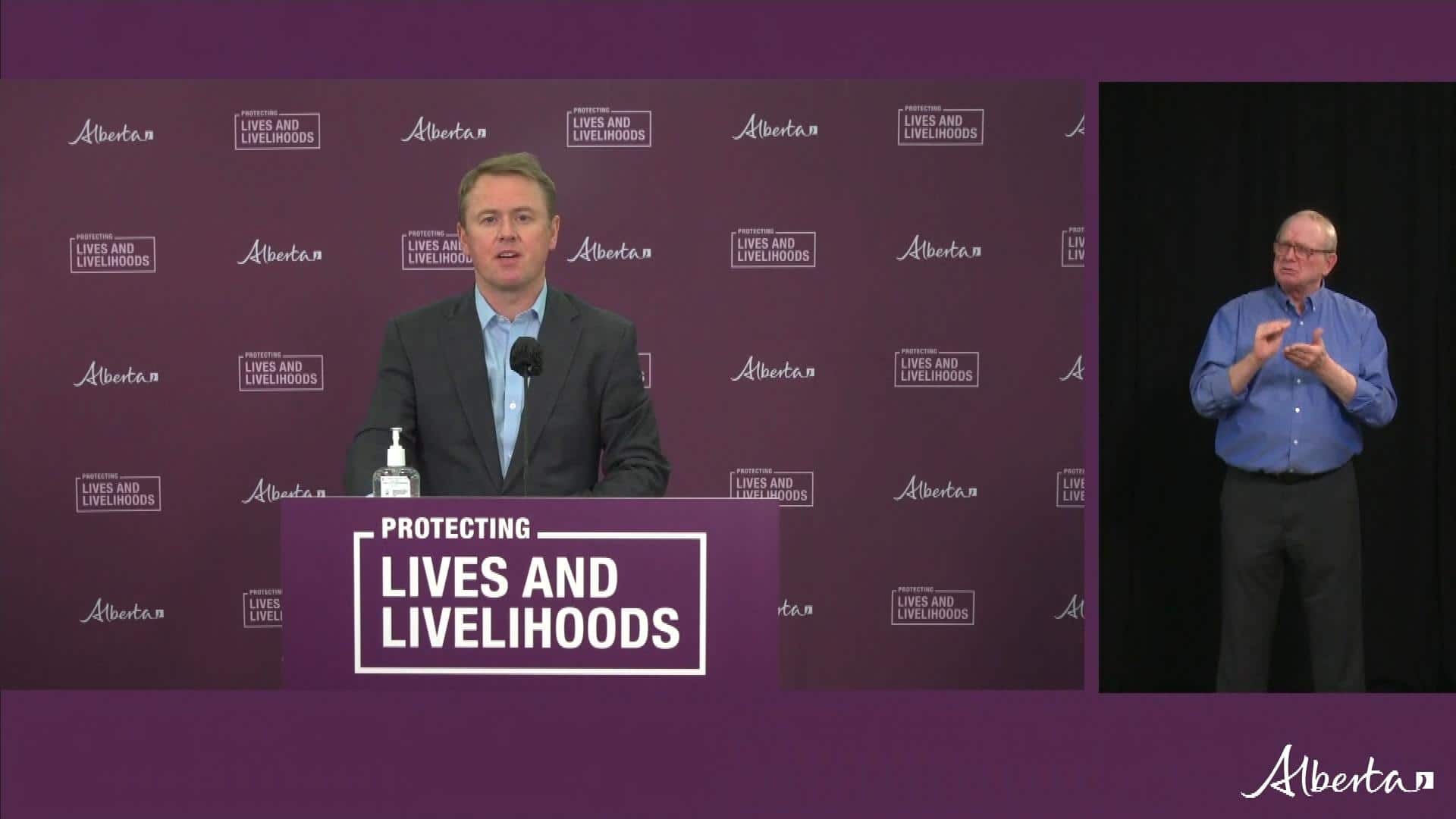 With COVID-19 case numbers continuing to fall in Alberta, the province has decided to loosen a few more restrictions under Step 2 of its reopening plan, says Health Minister Tyler Shandro. 1:16

“The situation is changing and we need to change along with it,” Shandro said Monday at a news conference. “We said that we’d complete Step 2 when it was safe to do so, and I believe that it now is.

“The time is right to keep moving safely forward, and at the same time there are reasons for us to remain cautious. We’re not seeing the same sharp decline in cases that we saw in December. Cases have plateaued. And we still have to consider carefully how to get the balance right. But I believe that this step, the remainder of Step 2 today, is safe,” he said.

“Just last week I announced that we should be able to offer every Albertans a first dose by June 30, and that changes the whole picture here in Alberta.”

Provincial officials are concerned that two recent COVID-19 outbreaks at Calgary-area high schools could be linked to indoor gatherings.

Last week, an outbreak declared at Cochrane’s Bow Valley High school had 16 confirmed cases of COVID-19 — which put more than half of its students and teachers in isolation.

Rocky View Schools told CBC News in an email last week that since a majority of students are able to attend class and they have enough substitute teachers, the school will remain open.

On Friday, Bowness High School in Calgary announced an outbreak which shifted around 1,184 students in grades 10-12 to online learning.

Dr. Deena Hinshaw, Alberta’s chief medical officer of health, says one concern that has been raised is that these two outbreaks might have been started because of large indoor gatherings.

“Remember that your actions don’t just impact you, they impact those around you. And again, not just your immediate circle, but there is a knock-on effect of transmission that flows through all of our networks if we’re not cautious,” she said at a COVID-19 briefing on Monday.

Alberta will expand its COVID-19 vaccine rollout to include people under age 75 starting March 15, and if shipments arrive as scheduled, all adults in the province will receive their first dose by the end of June, the health minister says.

“By June 30, we expect to have offered every single adult in the province at least one dose of COVID-19 vaccine,” Health Minister Tyler Shandro said Thursday at a news conference. 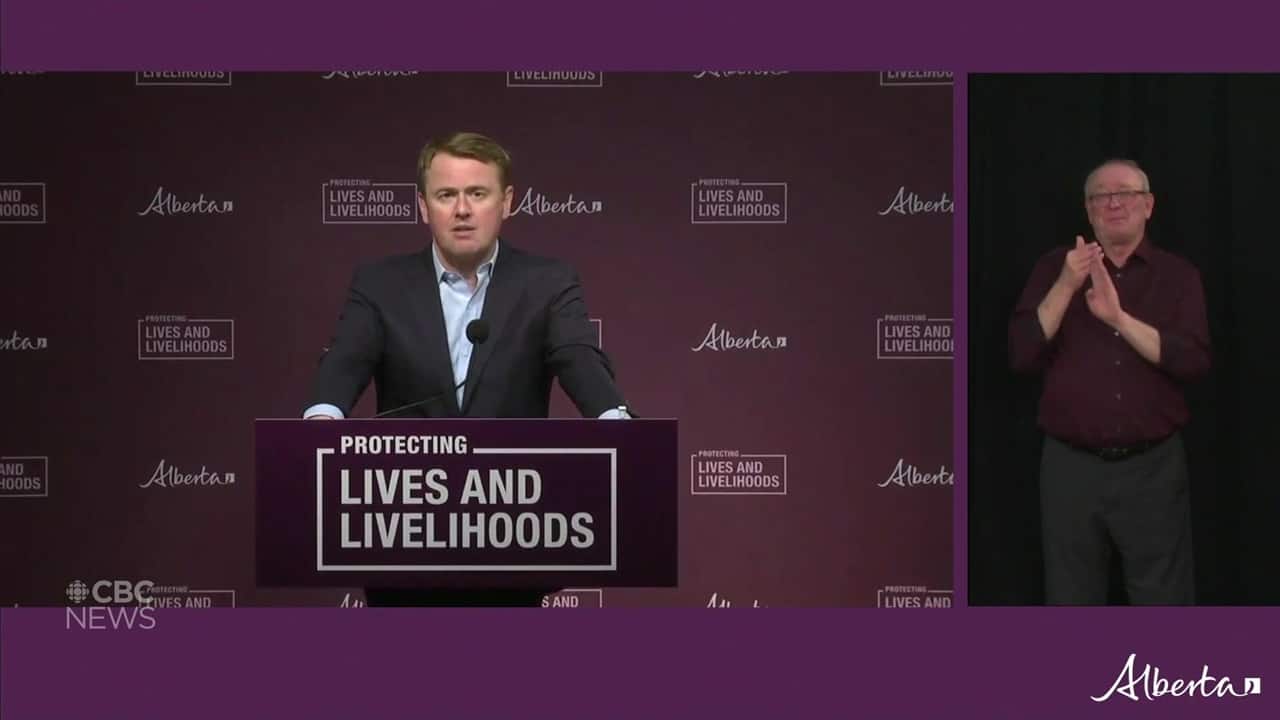 Alberta Health Minister Tyler Shandro said on Thursday that if vaccine shipments arrive as scheduled, all adults in the province will receive their first dose by the end of June. 0:52

Under the expanding vaccine program set to begin in less than two weeks, about 437,000 more people between the ages of 65 and 74 will become eligible for inoculations, Shandro said.

To avoid long delays for those making appointments, when Phase 2A begins on March 15 bookings will be offered in two-year age groups, Shandro said.

On the second day, eligibility will be expanded to include anyone aged 71 to 72, and so on from there.

For more, see: These graphics show just how deeply COVID-19 has infiltrated Alberta

Calgary expanded its Adaptive Roadways Program to include more roads on Saturday in order to provide more space for residents to physically distance as the weather warms.

The program was first introduced last year as more people spent time outdoors due to the COVID-19 pandemic. City pathways were widened by closing certain roads and parking lanes to motor vehicles.

“What we’re trying to do is really target areas that are super congested. And certainly we saw in Eau Claire the pathway system was packed last weekend,” said Ward 7 Coun. Druh Farrell on the Calgary Eyeopener.

Other roadways already widened include: