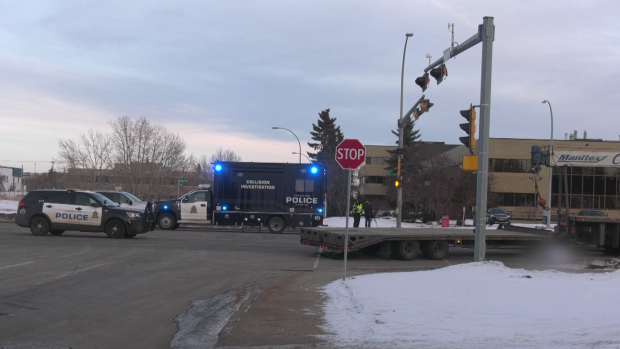 EDMONTON — A ghost bike will be installed on Wednesday after a cyclist was killed in a collision with a flat deck picker truck in east Edmonton Monday.

The collision happened around 3 p.m. at the intersection of 50 Street and 94B Avenue. The 64-year-old cyclist died at the scene.

Ghost bikes are bicycles painted white and placed at sites where cyclists have been killed.

“Everyone deserves to make it to their destination safely, no matter what form of transportation they use,” said Christopher Chan, executive director of Bike Edmonton in a press release.

Bike Edmonton is a non-profit organization founded in 1980 that offers cycling workshops and advocates for cycling accessibility in Edmonton.

In the release, Chan added that the intersection where the collision happened lacks full signals for eastbound vehicles accessing 50 Street from 94B Avenue.

The release cited a 2010 Transport Canada study that found truck side guards, which are not mandatory in Alberta, decreased cyclist fatalities in Britain by 61 per cent.

“Three of the five most recent cyclist deaths on Edmonton streets have occurred in collisions with heavy trucks,” said Chan.

“Truck side guards, mandatory in many parts of the world, protect people riding bikes from the sides of heavy vehicles and should be installed on all heavy trucks that operate regularly within our city.”

The ghost bike will be installed at noon on Wednesday.