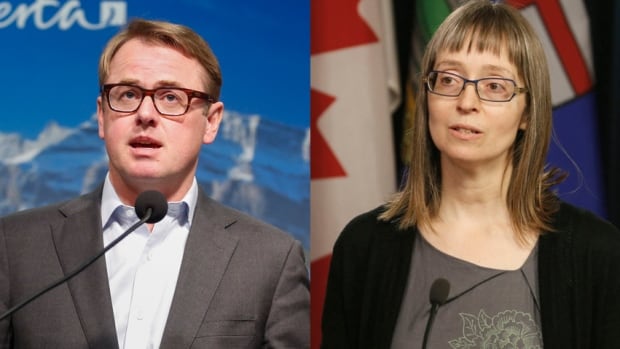 Albertans will be updated on measures to fight the COVID-19 pandemic Monday by the province’s chief medical officer of health Dr. Deena Hinshaw and Health Minister Tyler Shandro.

The briefing will begin at 3:30 MT. You can watch it live here.

Monday marks one year since the first case of the virus that causes COVID-19 was confirmed in Canada, in a patient who had recently returned from Wuhan, China.

During the previous week, the virus had spread rapidly around the globe, even reaching the United States.

On Jan. 21, 2020, Hinshaw issued her first warning about COVID-19, saying that Alberta was watching developments and taking precautions.

The outbreak in China had tripled in size over the preceding weekend, with hundreds of people ill and six confirmed deaths. First cases had also been confirmed in Thailand, South Korea and Japan.

One week later, on Jan. 28, Alberta activated its first low-level emergency response protocols. Hinshaw spoke about how the risk of community transmission was believed to be low but that the virus would likely arrive in the province eventually.

At that point, four cases had been confirmed in Canada, more than 9,000 across the globe.

Screening was increased in Alberta and doctors were told to be on the lookout for an illness that presented, at first, much like the common flu. There had been 18 Albertans tested for coronavirus but no positive results.

The province confirmed its first case of COVID-19 on March 5. Since then, 120,793 Albertans have been infected and there have been 1,549 deaths.

On Sunday, the province reported 24 more deaths from COVID-19 and 463 new cases, continuing a trend of declining new case numbers. The province said there are 652 people in hospital including 111 in intensive care unit beds.