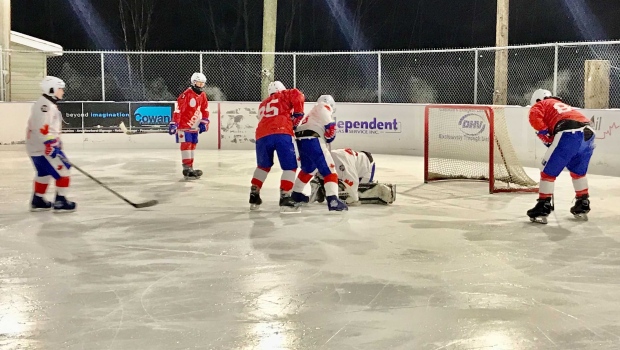 EDMONTON — This year’s World’s Longest Hockey Game will be one like no other with pandemic rules in place and dangerously cold temperatures in the forecast.

Still about 50 people involved with the cancer fundraiser east of Edmonton are determined to forge ahead, raising money for cancer research, a cause close to most of those taking part.

“It’s a great group of guys and I am pretty honoured to be asked to do it,” first-timer Mike Lowe told CTV News Edmonton. “I came out in support of my dad this year who’s going through a battle with cancer himself.”

The puck dropped at 6 p.m. Thursday but preparation for the game started long before that.

In order to receive a provincial exemption to public health rules, participants had to isolate at home and on site and are being tested for COVID-19 daily.

Even though they are living in a bubble, they must also limit their interactions with each other, refs must stay off the ice, and no spectators are allowed.

“We miss the fun of our friends and family coming into the locker room and fans we can’t have this year unfortunately but we have a drive through,” said organizer Brent Saik.

“I want people to bring pictures that we’ll laminate, we’re going to hang them up around the screen here, and that’s our fans this year.”

FOCUSING ON THE CAUSE

Family, friends and other fans are able to watch the game live online.

Player Lance Labrecque’s wife has been tuning in. She was diagnosed with a brain tumour 20 months ago.

“It’s 252 hours but at the end of the day when I was in the cross with my wife with treatments, you see treatments there, and it pales in comparison to what cancer patients go through with chemo and radiation,” said Labrecque.

This year’s fundraising effort will support a clinical trial of a new cancer drug called PCLX-001 which has shown positive results in treating blood cancers in particular.

In response to plunging temperatures, Edmonton has activated an extreme weather response to help the most vulnerable.

Temperatures over the next five days aren’t expected to get any higher than -20 C and the overnight lows will be in the -30 C range.

“It actually wasn’t terribly cold last night,” said Lowe. “I think the temperature was cold but we felt pretty good. We’re pretty well insulated and have had a lot of advice on how to prepare and how to prepare your feet and your hands.”

Still, the players acknowledge the game will be grueling.

Since the puck dropped a little later than scheduled, the World’s Longest Hockey Game is expected to wrap up around 6 a.m. on Monday, Feb. 15.