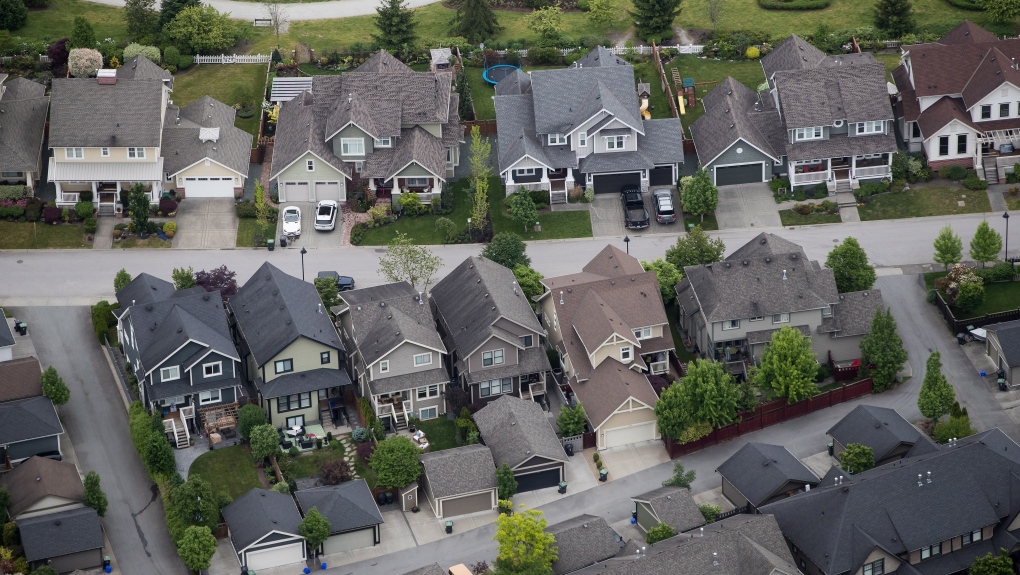 As the Bank of Canada continues to hike rates in order to curb inflation, housing prices in Canada could fall 15 per cent from its peak by the end of next year, a new report says.

The average price of a home in Canada peaked at just over $790,000 in February 2022, marking a 50 per cent increase over two years. But the report, published on Wednesday by Desjardins, says by December 2023, the average national home price could fall to around $675,000.

Since the Bank of Canada began to raise interest rates in order to combat inflation, home prices has steadily declined. Desjardins says that average price of a home in Canada fell 2.6 per cent month-to-month in March and 3.8 per cent in April.

But despite the expected drop, Desjardins notes that $675,000 is still nearly 30 per cent above what it was in December 2019, when the average price of a home was $530,000 in Canada. Jimmy Jean, chief economist and strategist for Desjardins, says he expects the decline in home prices to be “fairly manageable” before stabilizing, citing increasing levels in immigration and a continuous shortage of housing supply amid strong demand.

“Our expectation is for the housing market to cool to moderate, but we’re not expecting any collapse by any measure,” Jean told CTV News on Thursday.

For most homeowners who intend to keep living in their homes for decades to come, including those who jumped into the market near the peak, Jean says this housing correction will only be a small “blip.”

“Housing is an investment normally you make for the long-term,” Jean said. “Ultimately, you’re buying a product to raise a family, to live into. So, over the long term, things will stabilize and pick up again. So, it’s not a major concern from that perspective.”

But it’s a different story for real estate investors who were expecting huge gains from rising housing prices.

“If you rent out a property, sometimes, if you don’t collect enough in terms of rent to make up for the mortgage costs or the utility costs, those decisions were still justified by the idea that prices would keep appreciating,” he said. “Now it’s another story.”

The Bank of Canada is expected to raise rates again by another 50 basis points in July, and bank governor Tiff Macklem has indicated that interest rates may have to spike to 3.0 per cent.

But Desjardins economists believe Macklem won’t have to go all the way to 3.0 per cent and say 2.25 per cent will be enough to slow inflation.

“The Canadian economy is highly rate sensitive,” Jean said. “We think this moderation will be significant and will cause economic growth, and therefore inflation, to slow, and that will remove the necessity for Tiff Macklem and the Bank of Canada to hike all the way to three per cent.”

HOUSING CORRECTION TO BE MOST SEVERE IN MARITIMES

While a 15 per cent drop is what Desjardins forecasts nationally, some regions may experience even bigger corrections, particularly in parts of Canada that saw that steepest pandemic-era home price increases.

After years of population declines, the Maritime provinces saw an explosion in population growth from 2020 and onwards, as the advent of remote work enabled more Canadians from big cities to flock to the east coast, seeking larger and more affordable living spaces.

In turn, P.E.I., Nova Scotia and New Brunswick saw the highest housing price increases in the country. Compared to December 2019 levels, the average price of a home in these provinces rose 62 to 70 per cent in February 2022.

These provinces are also expected to see the largest corrections; Dejardins says housing prices could drop between 18 to 20 per cent.

The Prairies and Newfoundland and Labrador saw the smallest pandemic-era spikes in housing prices. These provinces rely heavily on oil, and crude prices took a nosedive in the early months of the pandemic. Home prices in these regions are only expected to fall between two to 10 per cent by December 2023, the Desjardins report says.

B.C.’s home prices are also expected to fall 15 per cent, closely mirroring the national average, while prices in Quebec will fall 12 per cent thanks to its “much greater housing affordability and less overvalued market,” the report states.

Ontario’s home prices are expected to decline 18 per cent, but these drops will vastly differ across regions. Much like the Maritimes, the communities within a few hours drive from Toronto saw home prices jump 70 per cent between December 2019 and February 2022 as many Canadians began to work from home. Desjardins says outside of the Greater Toronto Area, home prices could fall 20 per cent, with the biggest declines expected in Bancroft, Chatham Kent and Windsor-Essex.