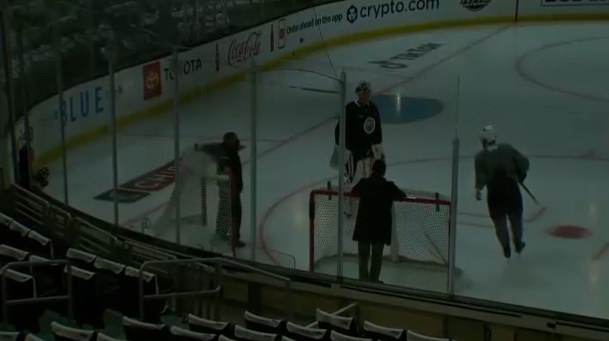 The Edmonton Oilers had a few laughs after their morning skate in Los Angeles Friday, following some apparent “game within the game” antics at Crypto.com arena.

Coaches and players pulled a few laps in near darkness while rink attendants held a tight grip on the nets, as seen in videos captured by TSN’s Ryan Rishaug.

Staff were not giving their opponents any extra time to shoot or see in full light before the Oilers’ 11:30 a.m. ice slot, something that was laughed off by the players and called a “non issue” by the coach.

“I dunno if that’s the rules or what it is, but definitely we had to wait, which is fine,” said a smiling Ryan Nugent-Hopkins after practice.

“Definitely had us right to 11:30 until they put the lights for us, but all good. We were just going for a couple of laps before getting the pucks out.”

Veteran forward Zack Kassian said he experienced something similar in California before, when the Oilers played the San Jose Sharks in 2017.

“It is what it is. It’s the game within the game, it’s fun. You just wait it out. I knew they were coming on eventually,” he said with a chuckle.

“It’s their arena, they can do what they want. I don’t think they forget to pay that bill in that building, there’s something in this rink every night.”

The Oilers ran their skate with the same forward lines and defence pairings that they deployed in their 6-0 Game 2 win on Wednesday.

“We expect a fast and physical game and we’re excited for it,” Head Coach Jay Woodcroft said.

He said he expects to play all four of his lines fairly evenly on Friday, much like he did in Game 2, but said the conditions of the game dictate that.

“We have a strong sense of belief in our players ability to get the job done, and I think we’re a deep team and I feel good about when anybody we dress is on the ice.”