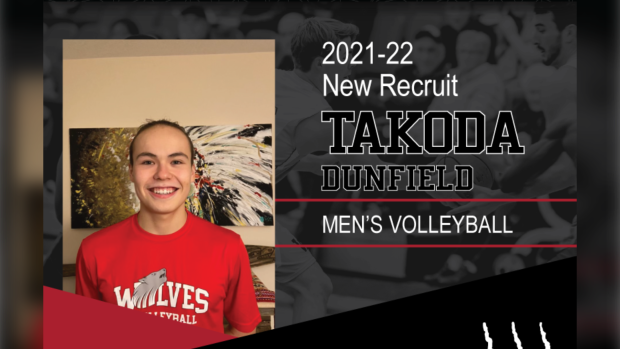 Takoda Dunfield still hopes to play university volleyball. But the 17-year-old Metis teen is now planning to hone his skills for the next couple of years by playing for his hometown Grande Prairie Regional College Wolves, starting with the 2021-22 season.

Dunfield had his eyes set on commencing his post-secondary career at the University of Calgary, but Calgary Dinos’ head coach Rod Durrant suggested Dunfield would be better off heading to the Wolves first to gain some more experience.

That, in part, is because the Dinos already have three other individuals who play the same position, libero, a defensive specialist position. Those players are heading into their second, third and fifth years with the Calgary squad.

Dunfield would have received very limited playing time, if any, if he started his post-secondary career in Calgary.

He is now planning to play two seasons for the Wolves before transferring to the University of Calgary, where he would have three years of collegiate eligibility remaining.

“That’s the plan for me right now,” he said.

Dunfield, who started playing volleyball when he was in Grade 8, is the first recruit to commit to the Wolves’ program for the upcoming season.

Dunfield will not turn 18 until October and is pleased he will be able to stay at home for the next couple of years before possibly transferring to the University of Calgary, which is located about 700 kilometres away.

His local college is a five-minute drive from his home.

“I don’t think I was ready to leave home so soon,” Dunfield said. “I think this will be a good start for my volleyball career.”

The Wolves are one of 14 squads that participate in the Alberta Colleges Athletic Conference.

Because of the COVID-19 pandemic, their 2020-21 season, which was supposed to start in the fall, was cancelled.

Dunfield attended various volleyball camps in his hometown the past few years. Some of these camps have included current Wolves’ players as instructors.

“I know most of the players really well,” Dunfield said of his future teammates. “I hope I can fit in with them.”

Wolves’ head coach Sam Tuivai has followed Dunfield’s progress the past few years. He even coached him in beach volleyball a few years ago.

Tuivai is pleased Dunfield is joining the Wolves.

“I’m excited to have him as part of our program,” he said.

Tuivai was among those involved in the discussions to have Dunfield consider playing at the college level before transferring to the university ranks.

Tuivai is fine with the fact he might only have Dunfield in his club for two years.

“I think it will be a good idea to develop his game, both mentally and physically,” he said.

Tuivai said he will not only focus on improving Dunfield’s athletic abilities, but he’ll also concentrate on bettering his academics so he can be prepared for university life, if that is indeed a route he chooses.

Tuivai anticipates Dunfield will get his share of playing time right off the bat with the Wolves, despite the fact he will be a rookie.

The squad does have a couple of other liberos on its roster, but Tuivai said he will, in all likelihood, convert one of those individuals to another position, giving Dunfield an opportunity for even more playing time.

“I think he will fit in well,” Tuivai said.

Dunfield believes he can make some immediate contributions to the team.

“I do feel confident in my abilities to play more than an average first-year (player) would,” he said.

Besides having his final season of high school volleyball cancelled because of the pandemic, Dunfield also missed out on a pair of other prestigious opportunities.

He had cracked the roster for the northern Alberta team that was scheduled to compete at the Arctic Winter Games last March, as well as the Alberta entry that was to take part in the North American Indigenous Games in Halifax this past summer.

Both of those multi-sport competitions were not staged.

While he was growing up Dunfield played hockey for seven seasons, but when he reached the Bantam level hitting in the sport was introduced.

“It just wasn’t my thing anymore,” he said of why he decided to give up hockey and concentrate on volleyball.

Dunfield was a member of the Wolves Volleyball Club, a youth league run out of the Grande Prairie Regional College, from his inception into the sport until 2019 when the organization folded.

He then joined the South Peace Volleyball Club, also based in Grande Prairie.

Though Dunfield took part in a few events with this club early in 2020, the pandemic prevented any further activities.