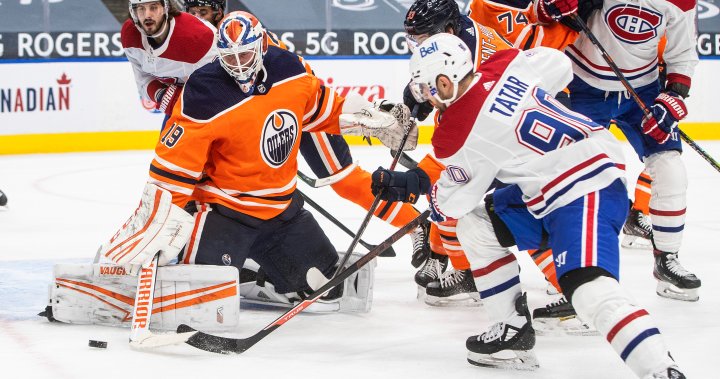 The Montreal Canadiens had their engine going early and cruised past the Edmonton Oilers 5-1 Saturday night at Rogers Place.

Montreal completely controlled the first period and opened the scoring on a power play goal by Jeff Petry. Connor McDavid had the Oilers best chance on a breakaway late in the session. He tried to go five-hole, but Carey Price made the save.

“They were definitely quicker than us playing three games in three and half days is a lot coming out of the gate but we’re not making any excuses for ourselves,” McDavid said. “We have to be better, we gave to win more battles. They were definitely the more rested team and they showed that. But I didn’t think our battle level was good enough. We’ll enjoy a day off and get back at it on Monday.”

The Canadiens kept coming in the second. Tomas Tatar wired a one-timer over Koskinen’s left shoulder to make it 2-0. Petry’s point shot was stopped by Koskinen, but the rebound banked in off Ethan Bear. Jake Evans added a shorthanded marker, making it 4-0 before the game was half over.

“We really believe in Mikko and I think he’s a tremendous goalie,” Adam Larsson said. “We kind of left him hanging a little bit. We can’t do that. They had a couple of breakaways the past two games too, so it’s not really on him, we just have to be better defensively.”

Tatar scored on a breakaway halfway through the third. Slater Koekkoek beat Price from a sharp angle for his first goal as an Oiler with 7:01 left.

“The easy ones you’re giving away, those are the tough ones to swallow when you’re supposed to be pushing,” Oilers head coach Dave Tippett said.

Earlier in the day, the Oilers claimed goalie Troy Grosenick off waivers from the L.A. Kings. He’ll have to quarantine and should be able to join the team the middle of next week.

“We’re going to have to regroup on Monday morning and figure a few things out, come out and look for a better result on Monday night,” Tippett said.

With files from 630 CHED’s Brenden Escott