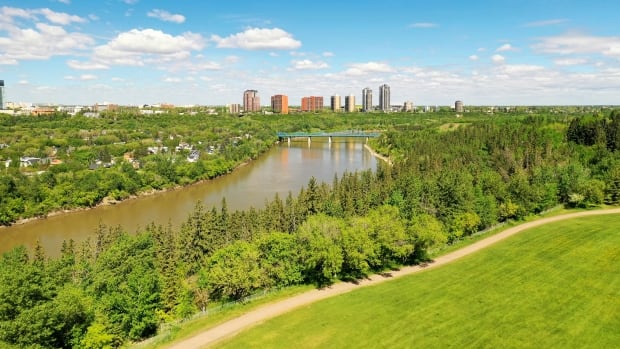 Members of the mountain biking community and multiple conservation groups say the city needs a trail strategy for the river valley.

Residents have been raising concerns about the future of single-track trails as the city updates outdated policies and strategy documents for the river valley.

Earlier this year, mountain bikers noticed that many of their favourite trails were located in “preservation areas” on a proposed city map. Preservation areas allow foot traffic but not mountain biking and cyclists fear 90 per cent of the trails they use could become off-limits under a new river valley plan.

Conservationists say they want the city to prioritize preservation and keep mountain biking out of ecologically sensitive areas.

More than 4,000 people offered feedback on the city’s proposed plans during a recent public consultation, the results of which were presented to the city’s urban planning committee on Tuesday.

Most comments were related to recreational trail use, with some participants concerned about losing access to trails and others worried about their ecological effects.

Terra Rasmussen, an Edmonton resident who often runs, mountain bikes and walks with her dog and children in the river valley, told the committee she was devastated to discover the density of unsanctioned trails.

In a 2.5-kilometre stretch of Whitemud Ravine, from the Alfred H. Savage Centre to the Snow Valley Ski Club, she found 19 kilometres of single-track trails on either side of the main path.

She urged the city to stop people from cutting down trees, creating new trails and building ramps and bridges.

“I’m just begging you guys not to take years on this,” she said during the meeting.

Councillors voted to recommend that city council allow the Edmonton Mountain Bike Alliance (EMBA) to maintain natural surface trails in preservation areas until trail locations are studied and a city-wide trail strategy is approved and funded.

“This is exactly what we’ve asked for,” Joe Yurkovich, president of the EMBA told CBC News after the meeting.

Yurkovich said if a trail needs to be closed for ecological reasons, cyclists in his group will understand.

“Our view, and our reading of the science, is that any activity has an impact, so if it’s found that humans can’t be in an area, then we’re on side with that,” he said.

Patsy Cotterill, a member of the Edmonton River Valley Conservation Coalition, the Edmonton Native Plant Society and the Stewards of Alberta’s Protected Areas Association, said she wants to see a trail strategy that is ecologically sustainable.

“Hopefully it would satisfy the mountain biking community so they would comply and basically it would maintain ecological protection,” she said.

Cotterill said the problem with rogue trails remains and she was disappointed to learn that the city has just seven full-time park rangers covering the river valley.

David Jones with the city’s community standards and neighbourhoods branch told the committee that almost half have been diverted to the city’s encampment response.

Yurkovich said he would also like to see unsanctioned trail-building stop and EMBA has told its members that it does not help their advocacy.

“Once we’ve got a well-designed, well-maintained system, we’re hopeful that the need for new trails to be built illegally can go away,” he said.