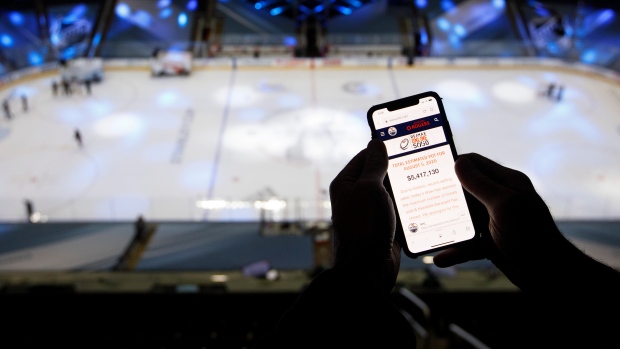 EDMONTON — Frenzy over the Edmonton Oilers online 50/50 draw may continue today as the hockey team’s community foundation holds another game-day raffle for its Alberta fans.

On Wednesday, the draw “shattered an all-time record” and had to close early after it reached the server provider’s maximum allowable ticket sales.

Officials say the provider has increased capacity by 2 1/2 times for today’s draw, which opened at 9 a.m. and is set to run until 10:30 p.m.

Game 4 of the Oilers-Blackhawks series starts at 4:45 p.m.

“The expectation is – although Oilers fans have proven they can shatter all expectations – that the server will have the capacity to handle demand,” said Tim Shipton, senior vice-president of communications for the Oilers Entertainment Group.

But on Friday morning, a number of social media users reported difficulty accessing the site.

The Oilers Foundation tweeted it had contacted its service provider who was working on the issue.

“They are seeing significant increase in demand, even beyond our previous game. They are working expeditiously to resolve.”

Some trying to buy tickets for earlier draws had also reported difficulty accessing the site.

The jackpot for Game 3 of the series on Wednesday grew to more than $5.4 million, with the lucky winner set to take home about $2.7 million. No winner has been announced.

Monday night’s raffle for Game 2 of the series beat the previous record for the largest sports raffle as the pot surpassed $3.2 million.

The previous record was held by Toronto Raptors fans when a 50/50 raffle reached $2 million during the 2019 NBA Finals, the year the team won the championship.

Natalie Minckler, executive director of the Oilers foundation, said its service provider for the online raffle has told them Wednesday’s $5.4-million draw was a world record.

She said she believes the 50/50 has captured the imaginations of Albertans during the COVID-19 pandemic.

“At a time when we all really need something positive and fun to talk about, to think about, to discuss with our family and friends, I think that has become that outlet,” said Minckler.

“I think it’s really taken on a life of its own. People, once they see that pot growing and the opportunity to win, I think they just get caught up in the frenzy.”

Shipton added that the excitement has even entered the bubble at Rogers Place.

“NHL players from around the league were fascinated and asking if they could buy tickets to the 50/50,” he said. “We had to remind them that as long as they are Alberta residents they could, but if not they were out of luck.”

With the team facing elimination from the NHL’s post-season on Friday, Shipton said the team is hoping for a double victory.

“We’re hoping that we’ll win both on and off the ice,” he said.

The other half of the funds raised from the raffles go to the Edmonton Oilers Community Foundation, which supports organizations focused on vulnerable populations in downtown Edmonton and youth sports throughout northern Alberta.

With files from The Canadian Press