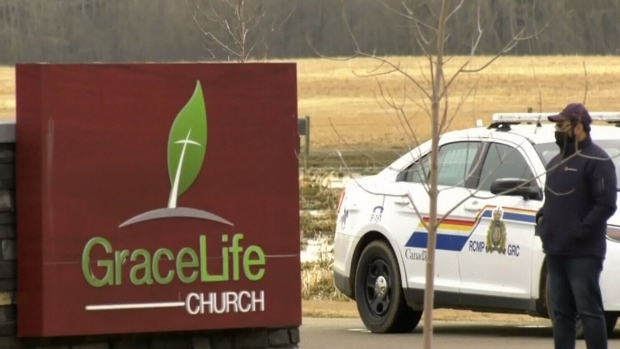 EDMONTON — Parkland RCMP arrested one person in connection with mischief and obstruction to the perimeter fence around GraceLife Church.

RCMP told CTV News Edmonton that this is the first arrest related to the protest last weekend when hundreds of people were seen signing hymns, chanting, and gathering outside the fenced-off church.

A few people successfully ripped down the fence surrounding the church last Sunday as RCMP held on to it from the other side. Another group of protesters helped RCMP put the fence back in place as others shouted, “Jesus would not take down the fence.”

RCMP said in a news release Sunday that they arrested the individual at 10 a.m. without incident for mischief under $5,000 and obstruction. They add that the individual was one of those involved with the fence incident.

The individual was released with conditions to not attend GraceLife Church property, Mounties say.

“Investigation continues to identify and locate other individuals involved in criminal activities of April 11th, 2021 outside GraceLife Church,” RCMP said in a statement.

The individual is scheduled to appear in court on June 30 in Stony Plain provincial court.