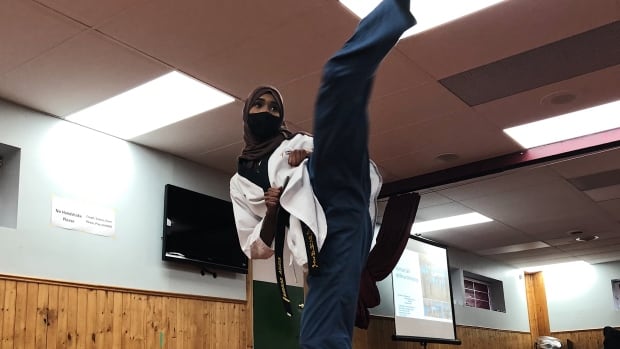 Aisha Barise says martial arts has always been a source of empowerment.

As a Muslim woman who wears a hijab, she says even the naysayers, skeptical of her place in taekwondo and karate, were just fodder for her competitive fire.

“Nobody can tell me what to do,” she said. “I’m very competitive and it drives me and it motivates me, going out there looking different and then competing.”

Now, after a string of attacks on six Muslim women in a 10-week span, she is sharing what she knows with other women in self-defence classes organized by Muslim community groups in Edmonton.

“There aren’t many people who look like me that train in martial arts, that compete in martial arts. So that’s why I took this opportunity,” she said in an interview before Sunday’s class at Markaz-Ul-Islam mosque.

The four weekly classes, which began Feb. 21, each host around 24 people after organizers got the go-ahead from provincial health officials, said Noor Al-Henedy, director of communications at Al-Rashid Mosque.

They sold out within hours, she said, with requests to add at least six more classes. It’s a sign, she says, of widespread concern among the city’s Muslim community.

“When we look at the bigger picture, there’s a huge education piece that needs to be done. Our city has to come together, our province, our country, to fight Islamophobia, anti-Semitism, hatred and racism,” Al-Henedy said.

‘You are very strong’

The recent spate of daytime attacks against Muslim women wearing headscarves dates back to December. A mother and a daughter were assaulted in the parking lot of Southgate Centre on Dec. 8. A week later, a woman was assaulted while waiting for a train at the nearby Southgate LRT station.

On Feb. 3, two women were assaulted in separate incidents, one at the University Transit Centre and the other near 100th Street and 82nd Avenue. Then, two weeks later, a Black Muslim woman was threatened at the Century Park LRT.

Barise, the instructor, says that while the physical element of self-defence is a given, there’s an important psychological dimension as well.

“As women we’re always taught to not fight back … to not to do anything, to not act, to not retaliate,” she said.

But self-defence instills a participant with a sense of their own agency, with the message that “you are very strong and you’re very capable,” Barise said.

Despite the empowering message, Barise says she’s still heartbroken to see a group of mostly mothers join a class out of fear for the safety of themselves and their families.

“Mothers that genuinely want safety for their kids,” she said. “These really vulnerable people were coming here asking for my help, and for me it was such a personal thing for a mother to come here with her kids in order to defend them and empower them.”