EDMONTON — A historical building in Edmonton’s downtown core was recently purchased by Gather Co. with the intent to transform the three-story building into flexible, transitional housing for women experiencing homelessness.

Stovel Block was built in 1912 and will be repurposed to house close to 30 women in the Edmonton area as they transition into long-term housing.

The women will have individual suites and a common kitchen space to allow for increased food stability and an enhanced quality of life.

According to a release on Tuesday, 2,000 people in Edmonton are homeless with the majority being between the ages of 25 to 65, and 47 per cent identifying as women.

Gather Co. saved the building from demolition and signed a lease with Boyle Street Community Services to bring this housing initiative to the community.

“The Heritage folks are passionate about saving, not knocking down. And the Boyle street folks are all about saving, trying to save and not giving up on people,” Kelly Pope, partner at Gather Co., said.

“Edmonton is facing a homelessness crisis that is exacerbated by the COVID-19 pandemic and the decline in Alberta’s economy,” Jordan Reiniger, executive director for Boyle Street Community Services, said.

“So many people in our city don’t know where their next meal is going to come from, and struggle to find a roof over their head each night, this facility will not only help that, but the programs offered through it will help to build skills for the future.” 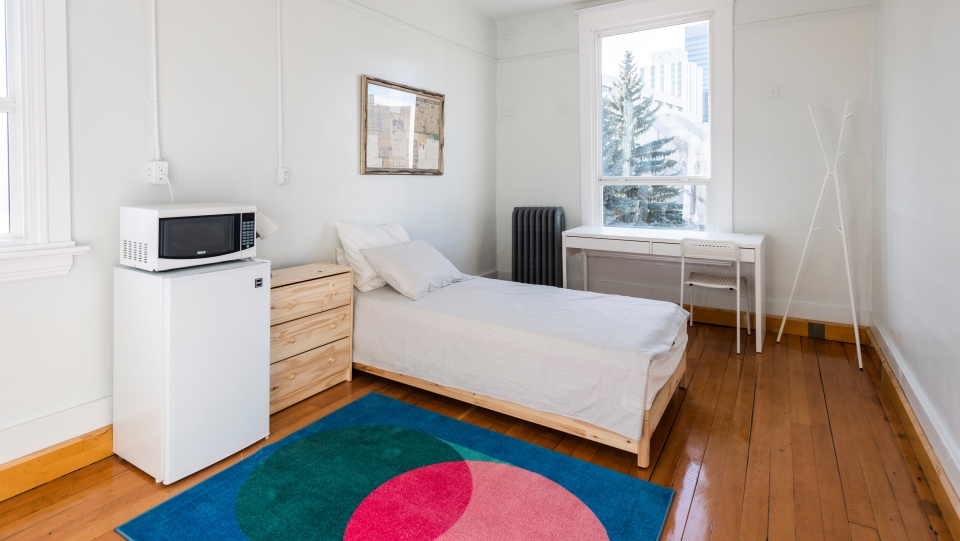 According to Pope, the building should be up and running in a few months. It will operate through a referral based program led by Boyle Street.

“I find we’re going to make a difference in some people’s lives which is really what this is about,” Pope said.

Reiniger explained the experience for women on the street is far more challenging than it is for men.

“The shelter model is not working,” he said. “It’s not a safe place for women or conducive to helping people move forward with their lives and get that support.

“Our goal here is to create more choice in the system.”

Before opening the building back up, Reiniger told CTV News Edmonton they invited Elder Rose Wabasca for a pipe and smudging ceremony.

Once the ceremony was complete, Wabasca gave Stovel Block a Cree name, Sakhita Kikinaw, which roughly translates to a house or place of love.

So far, the City of Edmonton has provided $645,000 in grant funding to go towards the rehabilitation of the building’s historical elements, according to the release. The full restoration, which cost around $1,356,000, was covered by Gather Co.

The city plans to end chronic homelessness by developing integrated systems that get people off the streets by 2022. Since 2009, more than 12,000 people have been housed through Housing First and related programs, the release says.

For more information on the new 30-unit housing block go to endhomelessnessyeg.ca.