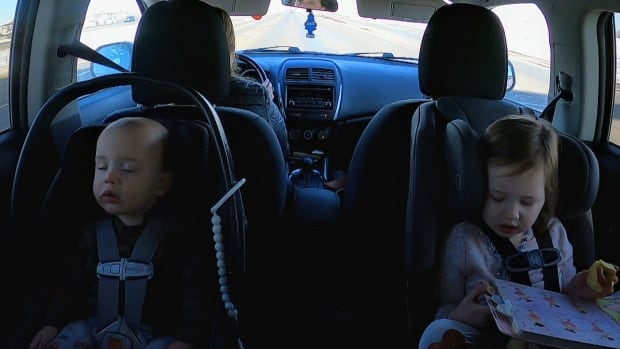 CBC’s Kory Siegers is spending time digging into stories just like this one that explore issues affecting neighbourhoods around the Anthony Henday ring road. We’d always love to hear your ideas. You can email us at edmontonam@cbc.ca or kory.siegers@cbc.ca

When the pandemic began, Stephanie Desjarlais was looking for something to get her out of her daily routine with two little ones.

The mother of three-year-old Ivy and one-year-old Allen saw someone post to Facebook asking how long it would take to drive around Edmonton’s ring road, Anthony Henday Drive.

The 80-kilometre loop takes about 50 minutes to go around.

“My baby won’t sleep in his crib. He likes to sleep with me. This is the best way to put him to sleep and make sure he gets a good nap,” Desjarlais said.

She is one of several parents who tell CBC they use or have used the ring road to get a little break.

“They give me a break for an hour and — other than passing some snacks behind my head — I get to just chill.”

Karena Dang, owner of Bumps Upon a Time, is a labour, birth and postpartum doula who helps educate and guide parents through the early stages of a child’s life.

She says she doesn’t recommend making the Henday part of a routine — but she understands why it works.

“The motion of a car moving is very similar to babies being in the womb. You have the white noise, you have the constant motion,” Dang said.

“If people are doing the whole loop, that’s about an hour round trip … that’s about two sleep cycles for a baby.”

Dang says parents should try to mix it up with stroller walks and baby wearing, something Desjarlais also incorporates.

One mother said the loop also gave her and her partner a chance to reconnect and have a conversation without having the kids jumping all over them.

“But at this point I’ve gotten used to it, so I don’t mind. It’s better than having a really cranky one-year-old wandering around crying.”